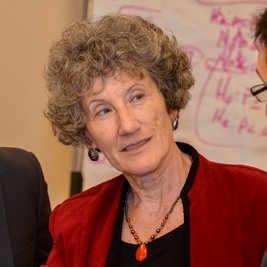 Dietsch Does It Again: Some Parents Choose Homeschool Because They Are Child Abusers

State Sen. Jeanne Dietsch, who sparked outrage by arguing parents who aren’t “well-educated” shouldn’t have the same education choices for their children as those who are, is now suggesting that some parents use homeschool in order to hide their ongoing child abuse.

During an online “listening session” with concerned constituents to address the fallout over her original statements about parents, educational attainment and parental choice, Dietsch attempted to explain her views.

“I am not worried about your children,” she assured the parents on the call. “I’m worried about the other children. As legislators, we must worry about all children. I think one reason the commissioner [Frank Edelblut] might want a statewide management system is that we have a very tiny percentage of homeschoolers who are parents who are using that system to neglect children.

“It’s a very small percentage. It’s parents who don’t want other people knowing what’s going on at their homes — the drugs, whatever is happening there. It’s a minuscule percentage, but it exists. It’s a reality,” Dietsch said.

“I am appalled to hear this kind of language coming from my Democratic Colleague. I know many homeschool families throughout New Hampshire that would take great offense to these disparaging remarks,” Senator Ruth Ward, a member of the Senate Education Committee, told NHJournal. “It is incredibly inappropriate for someone of this mindset to be a member of the committee in charge of our children’s education.”

“I saw the video of her ‘listening’ session, and maybe next she should have a ‘learning’ session.’ To bring up that homeschoolers are teaching their children at home to keep their child abuse from being seen is an outrage,” said state Rep. Glenn Cordelli (R- Tuftonboro), a member of the House Education Committee.

“Commissioner Edelblut has done a tremendous job with public schools, private schools, charter schools — he’s just knocked it out of the park in so many ways,” Sununu added. The governor also noted that with the challenges of COVID-19 in the coming year, “we should be expanding our education options to address the concerns some parents have about the traditional classroom setting.”

However, during her listening session, she did acknowledge that her previous comments about less-than-“well-educated” parents and their ability to make education decisions for their own children were hurtful.

“I hurt a lot of people’s feelings, and I’m sorry about that.”

Testifying before the House Education Committee in opposition to the Learn Everywhere program — which allows parents to choose outside-the-classroom educational opportunities for their children — Dietsch said:

“This idea of parental choice, that’s great if the parent is well-educated. There are some families that’s perfect for. But to make it available to everyone? No. I think you’re asking for a huge amount of trouble.”

When fellow Democrat and committee vice chairman David Luneau tried to inject that Dietsch was not, in fact, saying parents without college were less fit to oversee their children’s education, Dietsch interrupted to reaffirm her position.

Days later, she attempted to push back against charges of elitism by telling a story of her work with illiterate parents “on the South Side of Chicago,” a community that is more than 90 percent African American.

Amid the backlash, which included charges of racial insensitivity, Dietsch announced her “listening tour.”

During the same session in which she raised questions about homeschool parents and child abuse, Dietsch returned to her “well-educated” parents comment and offered another insight on how she views homeschooling parents.

Supporters of homeschool parents ask why Dietsch believes an education system that’s more like homeschooling would be a bad thing.