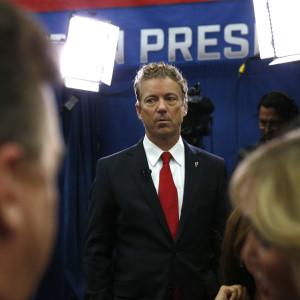 Rand Paul pauses after an interview in the spin room following the CNBC Republican presidential debate at the University of Colorado, Wednesday, Oct. 28, 2015, in Boulder, Colo. (AP Photo/Brennan Linsley)
News

“We haven’t had a presidential candidate like this in a long time,” Ben Wizner said Tuesday.

The lawyer for former National Security Agency contractor Edward Snowden was talking about Rand Paul, reminding InsideSources in an interview that the Republican senator from Kentucky focuses more on civil liberties than any other White House hopeful. That subjects is particularly important to Wizner, who directs the Speech, Privacy, and Technology Project at the American Civil Liberties Union. He may not agree with Paul on everything — and he refuses to tout any one candidate for civil libertarians to rally around — but he’s certainly glad to see someone making the case against government surveillance, someone willing to take on the security state.

Wizner still thinks Paul, whose poll numbers are among the worst in the Republican field, may yet “have a moment” in the campaign. Yet few observers are that optimistic. Writing in Politico earlier this month, New America fellow Michael Lind noted that the senator’s campaign has “all but disappeared from view.” The candidate who was supposed to capitalize on a Libertarian Moment, be “a Different Kind of Republican,” and live up to his reputation as “The Most Interesting Man in Politics” hasn’t in fact turned out to be that interesting.

Paul’s fortune hardly improved at Wednesday’s CNBC debate, where he got less time to speak than any other candidate. He was an insignificant presence throughout the event, and it didn’t go unnoticed.

Is Rand Paul on the stage? #GOPDebate

Rand Paul is so far at the end of the stage that he is out of focus.

So what’s a civil libertarian to do in 2016? If Paul leaves the race, is there hope that another candidate will champion his pet issues?

In the Republican field, Texas Sen. Ted Cruz is making a play for Paul’s supporters, highlighting his own opposition to bulk collection of Americans’ telephone data, among other issues.

Then, on the Democratic side, Vermont Sen. Bernie Sanders has committed to ending the NSA surveillance program. “I’d shut down what exists right now [which] is that virtually every telephone call in this country ends up in a file at the NSA,” he said during a Democratic debate on CNN earlier this month.

Sanders has staked out a more lenient stance on Snowden’s illegal leaking of information than former Secretary of State and Democratic frontrunner Hillary Clinton. The senator praised the former contractor, who fled to Russia for asylum after his leaks, for educating the American people about government surveillance. Moreover, he said during the CNN debate that “what [Snowden] did in educating us should be taken into consideration” if the former contractor is tried for his crimes.

Clinton, meanwhile, talked only about how Snowden broke the law. “He could have been a whistleblower. He could have gotten all the protections of a whistleblower,” she said, voicing a claim Snowden has disputed. “He chose not to do that. He stole very important information that has fallen into the wrong hands so I think he should not be brought home without facing the music.”

Wizner told InsideSources he “wasn’t terribly pleased” with Clinton’s comments, but he’s glad to see civil liberties issues raised in the campaign. Asked if there’s a candidate in the race who civil libertarians can feel good about, he didn’t name Sanders, Paul or anyone else. Instead, he said “civil libertarians can never feel good about the presidency, no matter what they might feel about a presidential candidate. The presidency itself is something that functions to accrue power.”

Wizner thinks Washington will follow the country’s lead on civil liberties, and he’s heartened by what he sees in the states. “In state legislatures around the country, particularly in red and purple America, you’re seeing a wave of legislation that restricts law enforcement surveillance and requires a warrant,” he said. “You have this coalition of civil libertarians and libertarians who have been very successful.”

Wizner gives President Barack Obama credit for embracing some NSA reform following the Snowden leak, even though Obama has pushed the authority of the executive branch during his tenure. Wizner believes one of the president’s great accomplishments was the Supreme Court appointment of Sonia Sotomayor, who’s emerging as an intellectual leader on privacy and other civil liberties issues.