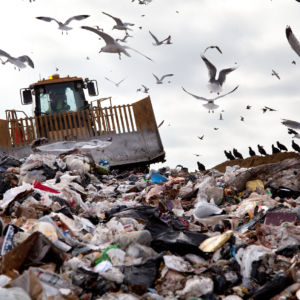 It seems that Congress and the Environmental Protection Agency aren’t on the same page — at least when it comes to the Puerto Rico landfill crisis.

A report from the bipartisan Congressional Task Force on Economic Growth in Puerto Rico released this week found that most of Puerto Rico’s landfills are in violation of EPA’s regulations governing solid waste management.

Yet, the EPA, in a letter to the co-founder of a Puerto Rico landfill advocacy group, was touting successes in closing some of the overrun landfills and ensuring that they care about Puerto Ricans environment and health.

The task force was created after the passage of the Puerto Rico Oversight, Management, and Economic Stability Act (PROMESA), effectively bailing out the island territory temporarily from its financial burdens, while setting up a Congressional oversight board to offer recommendations to improve their economy.

Although the landfill crisis is not directly related to the task force’s mission, they included a brief section about it in their 125-page report to Congress.

“Although this issue falls somewhat outside of the Task Force’s domain, the Task Force would be remiss if it did not discuss it briefly, given the risks to public health and the environment that appear to be posed by the status quo,” the report states. “The Task Force is concerned with the state of Puerto Rico’s municipal solid waste landfills, and the potential impact on public health and the environment. The Task Force recommends that the committees of jurisdiction in Congress examine this issue, which has only recently attracted significant public attention, to determine whether there are additional steps that can and should be taken.”

Puerto Rico’s landfill crisis has been escalating in the past 20 years. The EPA granted local authority of the 29 active landfills on the island to the Environmental Quality Board.

However, a citizen’s action group called Puerto Rico Limpio (or Clean Puerto Rico), alleges that the local EQB has not been enforcing any of the federal rules required of landfills, like placing a liner between the ground and trash or taking care of dirty water lakes from garbage runoff which could potentially impact residents’ drinking water.

The group also claims that 19 of the 29 landfills in Puerto Rico have been non-compliant for years and the EPA has ignored these problems, despite receiving several internal reports suggesting otherwise.

“The Task Force was clear: Congress is concerned with Puerto Rico’s landfills and their impact on public health and the environment,” said Hiram Torres Montalvo, co-founder of Puerto Rico Limpio, in a statement. “We thank the members of the Task Force for their commitment to Puerto Rico.”

Torres Montalvo also called on Congress to investigate EPA Region 2 Administrator Judith Enck and Director of the EPA’s Caribbean Environmental Protection Division Carmen Guerrero for negligence with the landfills, similar to how the United States is handling the fallout from the Flint, Mich. water crisis.

“Congress can play a vital role in doing what Enck and Guerrero have refused to do – close every toxic landfill that is threatening the public.  But just like Flint, they should conduct an investigation into the personal culpability and role of Judith Enck and Carmen Guerrero,” he said. “ They cannot escape from their guilt. They have said to Puerto Ricans: ‘you are second-class citizens.”

“This would never have happened in New Jersey, where two members of the Task Force reside,” he added. “Change has come to San Juan and Washington, and Puerto Rico Limpio looks forward to working with Governor-elect Ricardo Rosselló and the federal administration of President-elect Donald Trump to solve this scourge once and for all.”

The EPA recently announced that they would be closing two landfills, Arroyo and Cayey, and have legal agreements to close 12 landfills.

But the task force said that the EPA provided them with a chart, which claims about 70 percent of Puerto Rico’s landfills are in violation of federal regulations.

This is a different tone the EPA had after Enck sent a letter to Torres Montalvo where she said that 10 landfills operate with fully-lined disposal cells and even 15 sites have implemented a mosquito control plan. The landfills have become a breeding ground for mosquitoes where it poses a risk of spreading the Zika virus, which has already been a major issue for the island.

“The EPA continues to investigate the landfills on the island, and where necessary, will take legal action,” Enck wrote in a November letter. “Thus, the agency has acted and will continue to act to protect public health and the environment from adverse impacts from the municipal solid waste landfills in Puerto Rico.”

“It is encouraging to read that the EPA shares our concerns about this crisis, but given the dismissive approach and the continuing widespread contamination you even acknowledged in your letter, the EPA’s concern is not translating into any effective action,” he wrote back in a December letter to Enck. “There is no other way to describe this reality other than a dereliction of federal duty.”

Puerto Rico Limpio put forward a four-point plan with recommendations for handling the landfill crisis. They suggest revoking the permitting authority of the EQB, closing toxic dumps immediately, repurposing closed landfills for conversion for alternative energy uses and adopting a plan for full compliance for remaining landfills. And now they hope Congress will take action and make the landfill crisis a priority for the island territory.