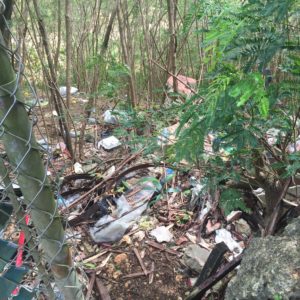 A small section of garbage just beyond the fence near a resident's house at the Toa Baja landfill in Puerto Rico. (Photo Credit: Kyle Plantz/InsideSources)
News

In an interview with a local Puerto Rican media outlet, the president of the Environmental Quality Board (EQB) made a shocking admission about the landfill crisis in the U.S. territory.

Weldin Ortiz Franco acknowledged that they have eight to 10 inspectors, who are not exclusively dedicated to landfill inspections and sometimes fail to inspect all the landfills on the island.

“We try to see them [in] quarterly fiscal years but there are many that we cannot do it,” he told The Spokesman in Spanish. To have more employees, he said, “we could have more comprehensive work plans and a system of more frequent inspections.”

The EQB in Puerto Rico has local authority over the 27 active landfills on the island. They received that power in 1994 when they submitted a proposal detailing how they would follow federal rules and regulations when in charge of the landfills.

However, a citizen’s action group called Puerto Rico Limpio (or Clean Puerto Rico), alleges that the local EQB has illegally changed some its original rules for landfills and didn’t get approval from the Environmental Protection Agency to do so.

The group also claims that 19 of the 27 landfills in Puerto Rico are non-compliant, and for years, the EPA has ignored these problems, despite several internal reports suggesting they should act.

The relationship of the EPA and EQB is a unique and tricky one. Once the EPA has granted local authority to the EQB, they are technically no longer in charge of the landfills.

“EQB has primary responsibility for regulating solid waste landfills in the Commonwealth, and federal landfill criteria governing solid waste are not directly enforceable by EPA in Puerto Rico. Only EQB has permitting and solid waste enforcement authority over the landfills,” said John Martin, a spokesman for the EPA, in a statement to InsideSources.

However, the statement Martin provided was the same exact language the EPA used in its September 2016 Fact Sheet, titled “EPA’s Work To Address Puerto Rico’s Landfills.”

But the EPA will step in and enforce federal laws if there are serious environmental and health risks under the Resource Conservation and Recovery Act (RCRA) Section 7003 Imminent and Substantial Endangerment Authority. They used that to send consent orders to nine open dumps — multi-family dumpsite of any size or content, which is illegal under RCRA — in Puerto Rico, according to a June letter from the EPA Region 2 Administrator Judith Enck on behalf of EPA Administrator Gina McCarthy to Rep. Dennis Ross, R-Fla.

Puerto Rico Limpio says the EPA is not doing enough to deal with the environmental and health problems in the territory.

“Weldin Ortiz confirmed what Puerto Rico Limpio has been saying from the start: the non-compliant landfills are toxic and should be shut down immediately,” said Hiram Torres Montalvo, cofounder of Puerto Rico Limpio, in a statement. “The failure to shut down these landfills rests solely with [EPA Region 2 Administrator] Judith Enck and the EQB, and attempts to abdicate responsibility by claiming there’s no money is a politically expedient attempt to shift attention away from their massive failure to protect the public’s health.”

Torres Montalvo also points out that Ortiz Franco says there is not enough staff in his office to carry out closures and perform inspections, but the EQB has essentially cut their entire staff.

According to EPA documents obtained by the citizen’s action group, in a 2014 assessment, the EPA found that the “EQB has eliminated or left open all central solid waste compliance and permitting staff positions.”

In the June letter, the EPA recognized that the current financial crisis in Puerto Rico could have an impact on EQB staffing.

“This problem is compounded by the dwindling resources made available to the Puerto Rico Environmental Quality Board by the central government to carry out their solid waste compliance and enforcement program, a situation that we understand predated the current fiscal crisis facing the Commonwealth,” Enck wrote. “This has resulted in, among other things, reduced staffing and reported delays in permitting of new and existing landfills.”

While, the EQB sends staff to inspect the landfills, the EPA will occasionally send its own inspectors to file “fact sheets” about the current state of the landfills for internal use.

Martin, the EPA spokesman, did not expand on how many times the EPA sends its own inspectors to Puerto Rico’s landfills and did not answer a question about whether the EPA receives any of the reports from EQB inspectors, who according to EQB president Ortiz Franco, are not able to inspect all of the landfills.

“The document you cite was an internal EPA briefing document,” he said. “The EPA conducts inspections of landfills in Puerto Rico, but does not conduct annual ‘general assessment’ reports.”

“We have the staff, we have the expertise, the obligation to do so and regulatory law. That [Gutierrez] helps us to have a Congressional funding level to fund landfill projects that approach the Board so that we can put up with the needs of the Board and collaboration with federal funds to hire more people and have a more agile process control at the facilities,” Ortiz Franco said.

Congress just passed in June the Puerto Rico Oversight, Management and Economic Stability Act, known as PROMESA, which aims to tackle the island’s billions of dollars of debt.

Gutierrez, who is of Puerto Rican heritage, isn’t Puerto Rico’s Congressman. Although he has an affinity for the island since he used to live there, there’s only so much he can do. He went to Puerto Rico recently to see the landfill crisis up close and how it is impacting residents who live in the neighborhoods around landfills.