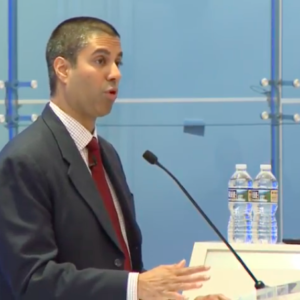 The comments come in the midst of Pai’s plan to dramatically scale back and possibly eliminate the Obama-era rules altogether. That plan has received more than 10 million public comments as it has sparked coverage on major cable shows and reignited public debate not only about open internet regulations but also conspiracies about hundreds of thousands of fake comments and cyberattacks all aimed at swaying the agency’s decision.

Net neutrality dominated a Tuesday hearing before a House subcommittee scheduled to discuss reauthorizing the FCC’s mission with its commissioners.

“I fully support legislation,” Republican Commissioner Michael O’Rielly agreed. “It’s the only way we’re going to get lasting peace on the issue.”

Commissioner Mignon Clyburn — currently the only Democrat and net neutrality supporter on the FCC — disagreed.

“I believe we already have certainty,” Clyburn said. “Title II is part of a congressional creation. Title II has been upheld by the courts,” she said referring to the section of the Communications Act the FCC used to classify internet service providers as public utilities in 2015. Title II is the strict regulatory authority it used to justify enforcing rules against web traffic throttling, blocking, and paid prioritization.

Undoing Title II, which Republicans believe undermines investment in broadband network growth, is the primary focus of Pai’s repeal. And despite Clyburn’s support for the rules she voted for during the previous administration, she wouldn’t rule out supporting an amendment to Title II in the context of broadband.

“I will reserve judgement on that,” she told lawmakers. “I will favor anything that will improve and enhance our ability to connect America.”

While Republicans including Senate Commerce, Science and Transportation Committee Chairman John Thune have been working on net neutrality legislation since before the FCC passed its rules in 2015, Democrats have until recently been unwilling to come to the table. Congressional Democrats have instead supported former President Barack Obama and former FCC Chairman Tom Wheeler’s Title II approach.

Title II is heavy-handed regulatation originally designed to break up telephone monopolies in the 1930s, and can potentially subject broadband providers like Comcast and AT&T to regulations like price setting (though the FCC under Wheeler expressly forbore from many of those regulations when it passed the rules).

There’s unanimous consent on Capitol Hill for rules against blocking, throttling, and paid prioritization, and providers themselves largely agree. Thune predicted in January that the threat of a Republican FCC repealing the Obama-era rules may be the only thing capable of bringing Democrats on board with legislation minus Title II.

Now Pai’s plan has made that threat a reality, and according to Oregon Republican Rep. Greg Walden — who chairs the full committee charged with overseeing the FCC — the House will begin seriously considering net neutrality legislation in the fall, with an initial hearing scheduled for September.

The congressman added he will begin sending invitations to leading tech companies including Facebook, Alphabet (parent company of Google), Amazon, and Netflix. They’ll be joined by some of the largest broadband providers in U.S. including Comcast, AT&T, Verizon, and Charter Communications, rounding out the other side of the debate.

“It is essential that we hear directly from the country’s top internet and edge provider leaders who frequently speak out publicly about rules of the internet,” Walden said. “It’s time for Congress to legislate the rules of the internet, and stop the ping pong game of regulation and litigation.”

“The FCC appears free to oscillate back and forth between these two fundamentally different regulatory regimes, based only on which party happens to be in the majority,” said Tim McKone, AT&T’s executive vice president of federal relations. “It is the job of Congress, not expert agencies, to resolve this kind of a fundamental question regarding the appropriate policy for regulation of the internet.”

“If they won’t join with us in opposing the [FCC] order, then hopefully they’ll side with us in legislation,” Blumenthal said of Republicans in July. That same day Crowley said it was time for Congress to “update our laws to make #netneutrality permanent” in a Facebook post.

Some leaders of major edge providers are also coming onboard. The same day Blumenthal and Crowley mentioned legislation, Facebook CEO Mark Zuckerberg said the social media giant is “open to working with members of Congress and anyone else on laws to protect net neutrality.”

The Internet Association, a trade group representing the biggest companies and net neutrality supporters in Silicon Valley including Amazon, Google, Netflix, Reddit, Twitter, and others, told the FCC in a recent filing it’s “open to alternative legal bases for the rules, either via legislative action codifying the existing net neutrality rules or via sound legal theories offered by the Commission that will satisfy judicial review.”