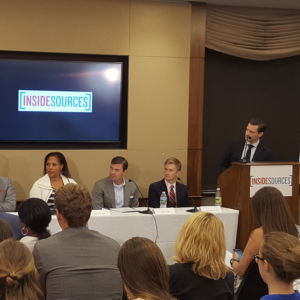 Free Data an Opportunity for Industry and Consumers, Say Experts

Zero rating is when content providers partner with carriers to pay for subscribers’ data use on their apps instead of the carrier counting it against a customers’ monthly data caps. Panelists made the case that free data programs have benefits for consumers, carriers, and content developers.

According to Geoff Lane, director of U.S. policy and government relations for the Application Developers Alliance, zero-rated services are a boon even to startup developers whose apps aren’t part of the programs, since it frees up more of consumers’ data to use elsewhere.

“The more data that’s in the hands of consumers, the more opportunities consumers have to tinker with apps and other products and services, the better,” Lane said. “We have a number of companies who don’t have zero-rating agreements with any of the carriers, but because consumers have extra data in their pockets, they can go out and use these newer and still growing apps.”

“A rising tide lifts all boats, more data lifts all products,” he added.

It’s also clear that consumers like zero-rating programs, which are now offered by T-Mobile, Verizon, AT&T, and others.

The potential for zero-rated services to favor certain content providers over others has caught the attention of net neutrality advocates and the Federal Communications Commission. The FCC opened an inquiry into zero rating in December to examine whether the services could run afoul of its net neutrality rules, recently upheld in federal appeals court.

“There are potential downsides as well,” Eduard Bartholme, executive director of the consumer advocacy hotline network Call for Action said. “Deals that are exclusive in nature and seek to handicap new entrants and establish competitors won’t result in a net consumer benefit. The FCC and others should play an active role in monitoring for this type of activity and take appropriate actions if it’s occurring and rectify the situation.”

Despite that potential, the network responsible for recovering millions in goods and services annually has yet to receive a call about zero rating.

“With a network that reaches tens of millions of consumers daily, and invites them to call and share their problems, questions and concerns, we’ve yet to field a call complaining about free data or zero-rated content,” he continued. “Consumers in general tend not to complain about free stuff as long as it’s clear how it works and why they are getting it.”

While the ideological divide has become a focal point of the debate surrounding zero rating in Washington, the reality for a large portion of poor minority communities across the country is “a choice between bread and broadband,” according to President and CEO of the Multicultural Media, Telecom and Internet Council Kim Keenan.

Keenan, former general counsel and secretary of the NAACP, said free data can help alleviate that choice, and give those communities equal access to jobs, healthcare and other essentials of the broadband age.

“[Data] is not one size fits all, but for some people, that fit is even tighter, because they have a real budget,” Keenan said. “It’s not like you spend a little more on Starbucks, so maybe you don’t shop that week — it’s a real budget where it is bread or broadband, or rent, or whatever that real thing is.”

“This is an issue that should not be a Republican or Democratic thing, this is an American thing.”

Financial industry expert and columnist John Burnett, who’s written extensively about zero rating, agreed the partisan divide is a product of Washington politics, and said closing the digital divide should be the primary concern.

“What would that feel like on a monthly basis if I had to check how much data I have left, and try to make a decision between accessing this app or downloading this — that’s a nightmare,” said Burnett, who also acts as a strategic advisor for the GOP New York State Committee. “I think we really should look at what is going to maximize data usage, what is going to maximize connecting people to the internet, and I think free, sponsored data is the way to go.”