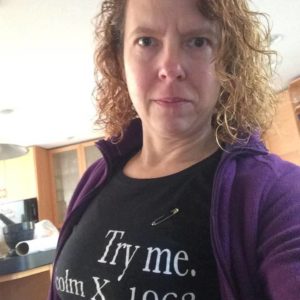 House Majority Leader Jason Osborne (R-Auburn) has sent a letter to New Hampshire police chiefs asking them to take “necessary precautions” after a Democratic state rep suggested some House Republicans refused to denounce last week’s riots at the U.S. Capitol and tweeted their names, home addresses and phone numbers. According to the letter, the tweets resulted in some state representatives being “constantly harassed and threatened” in their communities.

Publishing private or identifying information about specific individuals on the internet, typically with malicious intent, is known as “doxxing.”

The issue began during the Convening Day of the current legislative session, which coincided with the January 6 ransacking of the U.S. Capitol. Majority Leader Osborne and Democrat Leader Renny Cushing (D-Hampton) took the opportunity to make a non-partisan show of unity, offering a motion to suspend the rules to pass a resolution to condemn the violence happening at the time. The rules suspension passed handily, with only 35 members — 33 Republicans and 2 Democrats — voting in opposition.

Once the rules were suspended, the resolution condemning the D.C. violence passed unanimously.

Apparently, that was not enough for progressive activist Rep. Sherry Frost (D-Dover). She called the 33 GOP members “who voted AGAINST allowing a suspension in the rules for a proclamation condemning the violence in DC during the @NHHouseofReps,” adding the hashtag #Madness. She also tweeted out their personal information, including their home addresses.

Frost pointedly did not include her fellow Democrats who voted against the rules, claiming, “I reached out to both of [the Democrats], and they told me that they voted in error and are working to have that correction noted in the permanent journal.”

The two Democrats, Reps. Caroleta Alicea (D-Boscawen) and Willis Griffith (D-Manchester) have since said publicly they made a mistake — an understandable one given that the House was meeting in a parking lot. Members were interacting via car horn and radio due to the COVID-19 pandemic.

At that January 6 session, legislators spread across the seven-acre parking lot with remote control voting clickers and followed the proceedings on low-band FM radio, just like at modern drive-in movie theaters. The only screen – located next to the rostrum – was visible to perhaps one-third of the members. While voting, those members were also instructed to turn off any Bluetooth features on their devices or in their cars, including ‘hot-spot’ functionality to connect laptops to the internet.

Several members who voted against the suspension told NHJournal they had no idea what was going on in D.C. Once the rules were suspended, House Clerk Paul C. Smith read aloud the actual resolution, which then received unanimous approval.

Those facts haven’t stopped other Democrats from piling on.

“Know these names,” said former Rep. Wendy E.N. Thomas (D-Merrimack) in her retweet of the content. Thomas is the only filed Democrat candidate in the special election to fill the late Speaker Dick Hinch’s seat, who passed away on Dec. 9. 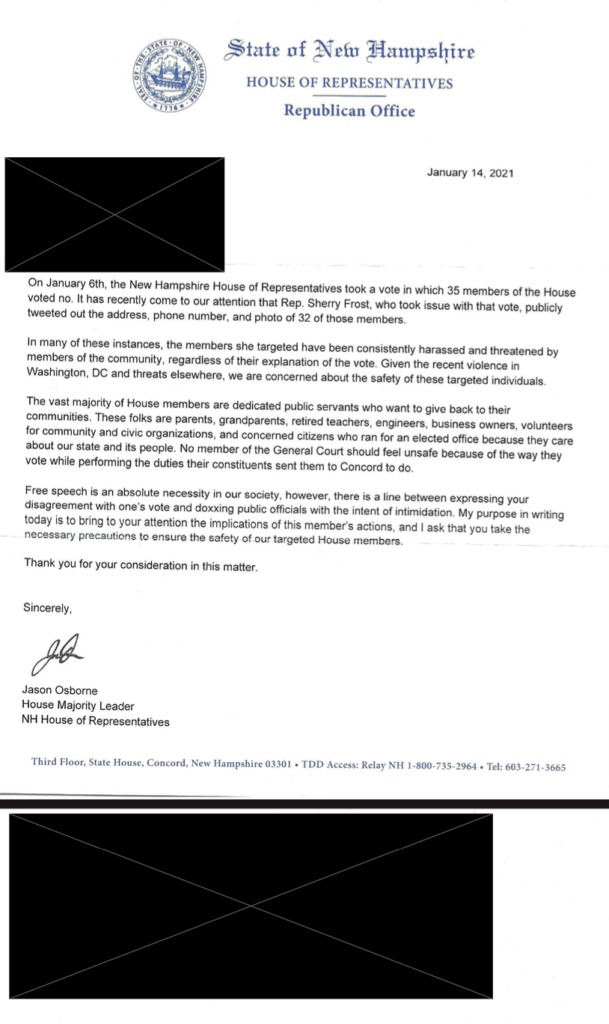 While Rep. Frost’s tweets may not meet the full definition of doxxing — much of the information she sent out is public if voters want to look for it online — however, the politically-motivated messages targeting members’ homes still raised concerns among House GOP leadership.

“In many of these instances, the members she targeted have been consistently harassed and threatened by members of the community, regardless of their explanation of the vote,” reads Osborne’s letter to local police. “My purpose in writing today is to bring to your attention the implications of this member’s actions, and I ask that you take the necessary precautions to ensure the safety of our targeted House members.”

Frost is known as a flamethrower on social media. On November 3, Frost posted a meme on Facebook reading, “The tolerant left? No, they’re down the hall. We’re the ‘f— off and die you racist motherf—–s left.'” A commenter on that post says to “Make America Great Again,” they are required to “punch nazis,” to which Frost responds, “I’m in.”

“Considering the representative’s ongoing record of violent rhetoric, we took some precautions,” Osborne told NHJournal. “Unfortunately, in these politically charged times, we must continue to be on guard against such incitement as making Lists has become a favorite hobby of radical democrats.”

This is just the latest in a series of social media incidents to roil the new biennium’s early days. Two Republicans, Reps. Dawn Johnson and James Spillane, have already been called out for sharing anti-semitic memes (they both claim it was unintentional). A Democrat, Rep. Rosemary Rung, lost her committee assignment after calling a local police chief a “terrorist” for attending a protest in D.C. where President Trump allegedly incited the violence that occurred at the Capitol.

Will the social media woes of New Hampshire House members go away soon? Likely not, but Majority Leader Osborne has hope. “Perhaps soon we can go back to using social media for its highest-valued purpose: posting kitten memes,” he says.