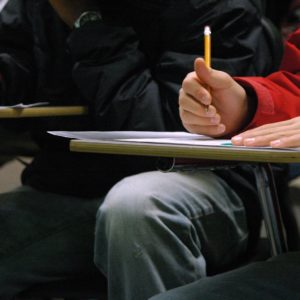 In a nationally representative survey, the vast majority of high school students reported an intrinsic desire to learn and grow intellectually. Nonetheless, persistent dropout rates and complaints that schoolwork isn’t engaging are raising the argument that schools—or the entire education system—need to adapt to capture and retain student enthusiasm for learning.

The survey released today, “What Teens Want From Their Schools,” solicited responses from over 2,000 high school students. The Thomas B. Fordham Institute, a center-right education policy group that supports well-regulated school choice and rigorous academic standards, issued the study.

While representations of “slacker” high school students abound in popular culture and media, the survey’s findings suggest that the vast majority of students in American high schools try hard to do their best scholastically. More than 90 percent of the students surveyed said they agreed with the statements that “I complete my assignments” and “I pay attention to things I am supposed to remember.” Over 80 percent reported “I go back over things I don’t understand” and “I try to figure out the hard parts on my own.”

Beyond their desire to learn, however, the researchers identified different motivations related to what most appeals to students about school. Borrowing from other studies and commonly used psychological classifications, the researchers first sorted students into behavioral, cognitive, and affective categories. In other words, a behaviorally motivated student could be expected to participate because of social expectations, a cognitively engaged student would find the act of critical thinking to be rewarding, and an affectively engaged student might develop a positive emotional attachment and sense of community on campus.

The researchers then broke down the categories further to create six “engagement types” in classrooms. Nearly half were determined to be primarily affectively engaged students: the “social butterflies,” the “emotionals,” and the “teacher responders.” Another third were classified as cognitively motivated: the “deep thinkers” and the “subject lovers.” The remaining 17 percent of behaviorally engaged students all fell into one category: the “hand raisers.” The report then goes into depth on the social and demographic breakdowns that are most represented in one engagement type versus another.

Some of the most interesting details to emerge included the fact that “deep thinkers” are not always the best students, in fact many are uninterested by what is taught to them in class and they disproportionately think seriously about dropping out. On the other hand, as one would expect, “teacher responders” tend to value and seek out strong bonds with their educators.

The authors of the report explained the decision to segment students into groups is necessarily an artificial heuristic. The authors explained that “segmentation” is commonly used by advertisers, but can also be useful for developing social science research and policy solutions. The researchers stressed that students may not fit perfectly into a category and that their assigned category should be considered their “dominant” engagement type—among others that they may be more or less inclined to.

While the researchers did find commonalities among the students within engagement types, the methods used by the researchers also fit with the educational philosophy supported by the group that issued the study, the Fordham Institute. Because, generally speaking, the Fordham Institute supports expanded school choice options, the forward and concluding sections of the survey used the classifications to advance pro-education reform arguments.

The solution, according to Fordham, is more diversity in public school options (including charters), greater access to private schools, and more study of alternative schooling methods such as homeschooling or online learning.

Meanwhile, other education reform advocates, who often agree that education needs to become more personalized, would differ in the conclusion that the education system needs to be fundamentally restructured. For example, longtime Rochester teacher’s union leader Adam Urbanski recently told InsideSources that, with some tweaking, public schools can provide engaging offerings to all types of students from all types of backgrounds.

The debate over engagement types and supply-side solutions is likely to continue as long as Secretary DeVos, an avowed school choice advocate, remains at the helm of the Education Department. Though her team has poured cold water on the prospects for a federal voucher program, the administration’s proposed budget sets aside extra funds for school choice and numerous parental choice laws have been enacted or are being seriously debated at state and local levels.

Originally, the penultimate paragraph of this post tentatively contrasted the Fordham study’s use of “engagement types” to work done by Ulrich Boser, a senior fellow at the Center for American Progress, that is critical of the popular misconception of “learning styles.”

Per links provided by Boser, more can be learned about “learning styles” here and here.