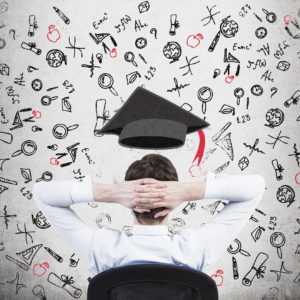 According to the open letter sent by the National Association of Scholars to Secretary of Education Betsy DeVos and Congressional leaders, the Higher Education Act, which is up for reauthorization, does not do enough to protect students’ First Amendment freedoms and has a series of other flaws. Hundreds of academics, think tank members, and independent scholars have signed on to the letter, and endorsed its specific policy recommendations.

The National Association of Scholars has been labeled “right-leaning” or “conservative” in the press, but its president, Peter Wood rejected those labels in an interview with InsideSources. The group publishes a quarterly journal, issues reports, and advocates for an ideal of a de-politicized higher education system.

“Universities should remain out of and above the political fray,” said Wood, who was previously the provost of The King’s College in New York. According to Wood and other commentators, the academic world has skewed unapologetically to the left in recent years, which arguably frames most efforts to limit institutional support for political causes as anti-progressive.

Among the proposals, the missive calls for the secretary of education to consider stripping federal aid from higher education institutions that fail to protect free speech. In particular, the signatories want student groups to be able to operate independently of institutional interference, including if they want to selectively admit members based on race, class, sex or gender.

Wood pointed to examples of colleges that have stripped recognition from religious groups on campus because they blocked some members from standing for leadership positions. He believes that because both private and public higher education institutions avail themselves of public student aid, free association protections should be broadly applied to on-campus student groups.

Wood conceded that these protections would result in some groups of “an unpleasant constitution and character” being allowed to operate—the letter would appear to permit the creation of a campus group in which one or more racial groups are barred from joining. But, he argued, many such unsavory groups are already permitted—as long as they conform to the prevailing political winds on campus.

There is “asymmetry” in how groups like Black Lives Matter that regularly employ racially-biased policies are tolerated, while religious groups are arbitrarily targeted, said Wood. His group would like to see schools that accept public funds take a more hands-off approach to regulating student organizations.

The letter also echoes some of the criticisms of the federal student aid and loan programs articulated by conservatives. The letter endorses the Bennett Hypothesis, which argues that increased government aid for tuition expenses only inflates the cost of getting a degree. Notably, the letter does not call for a return of private capital to the student loan system, but it does call for states to take a bigger role in administering loans and aid.

Wood said he would also like to add a step to the federal aid process. Currently, funds awarded to students through loans or Pell Grants go directly to schools. The open letter calls for students to receive those funds in the form of a voucher, that they would then redeem with their school for tuition credits. Arguably, this process would force students who receive aid or loans to better appreciate the financial investment the government is making in them, and to tangibly illustrate the debt burden they might be personally assuming.

Furthermore, the National Association of Scholars would like to get colleges and universities to “have skin in the game” when loans are awarded. The proposal would put higher education institutions on the hook for 30 percent of the principal and interest accrued on student loans for students who fail to graduate from their programs. This proposal would arguably disincentivize the enrollment of under-qualified applicants and could curtail student loan defaults.

Some of the other miscellaneous higher education reforms included in the letter would define Title IX protections on the basis of chromosomal genetics, would “sunset” any non-binding education department guidance after five years, and would allow Congress to “crack down” on the practice of giving hefty speaking fees to public figures, like politicians. The reforms’ backers also called for an end to the previous administration’s “war on ‘for-profits’”—a development that the financial markets are clearly anticipating independently of legislative action.

Finally, the group would like to see a distinction between “remedial programs” and higher education. The letter suggests that “basic literacy” should be a prequisite for entering higher education, and federal loans to illiterate students end up burdening those students with debt without giving them any realistic hope of attaining a degree.

While there are higher education areas in which Republicans and Democrats are on the same page, the prospects for a full reauthorization of the Higher Education Act in this Congress appear complicated. In addition to disagreements over the role of for-profit schooling and the government’s role in protecting civil rights, there are other items that appear to be higher up on the new administration’s educational legislative agenda.

Furthermore, the Senate’s Health Education Labor and Pensions Committee, which would help craft a Higher Education Act reauthorization, has a lead role in the high-profile initiative aimed at overhauling the nation’s health care system.