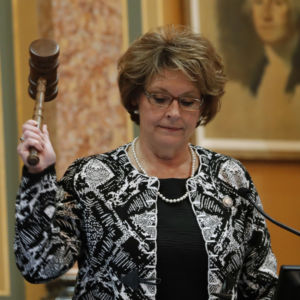 The Iowa House of Representatives passed a long-awaited water quality funding bill, Senate File 512, making it the first piece of legislation to head towards Governor Kim Reynolds’ desk to sign in 2018.

The bill sets up a Water Quality Infrastructure Fund within the Division of Soil Conservation in the Iowa Department of Agriculture to help fund programs that are means tested by the Iowa Nutrient Reduction Strategy (INRS). Total funding for the bill is $280 million dollars over 12 years, according to Rep. John Wills (R-District 1), the bill’s sponsor, and will be used for cost-sharing and cost-reduction programs to allow contributors of point (municipalities and industry) and non-point (farm land) pollution to implement science backed strategies to reduce nitrogen and phosphorus runoff that contributes to the hypoxic “dead zone in the Gulf of Mexico.

The bill uses two sources of funding to back up the intents of the legislation. Beginning in July 2018, one cent would be redirected from the sales tax on water usage in municipalities to the fund. In 2018-2019, that number jumps to two cents redirected, and then three cents in 2019-2020, redirected. Then, in 2020, an additional $15 million goes to the program, annually, until 2029. This $15 million comes from gambling receipts that are currently paying off the debt to the Vision Iowa Program. The debt expires in 2020, meaning that the $15 million spent on debt services can be redirected. The bill would sunset in 2029, as would the funding allocation and excise tax.

Previously passed by the Senate in the final days of the 2017 legislative session, Senate File 512 was met with much disagreement when it came time for the House to bring the bill to a vote that same year. The House, already prepared with it’s own water quality funding bill, HF 612, decided to attach that bill as an amendment to the Senate’s bill. In the final hours of the 2017 session, the Senate rejected the House’s amendment, rendering the House edition of the bill dead.

In a previous interview with InsideSources, Chair of the Natural Resources and Environment Committee Sen. Ken Rozenboom (R-District 40) said that attempts were made to compromise between the two chambers in the final 24 hours of the 2017 session, but all attempts had “fallen apart.” The main disagreement between the two chambers, both Republican controlled, was the longterm source of funding for the bills, and the responsible parties for managing the funds and implementing the INRS. With the Senate rejecting the amended bill last year, the House was confronted with its first debate and vote in 2018, facing pressure from Reynolds (who said a water quality bill was the first bill she wanted to sign) and Secretary of Agriculture Bill Northey to get the law passed.

Though the bill was approved by a 59-41 margin, public comment from Representatives was mainly negative towards the passage of the bill, with House Ways and Means Committee Member Rep. Chip Baltimore (R-District 47), a key legislator in drafting the House bill, citing a “lack of integrity” in all parts of this particular legislative process.

“To be perfectly blunt,” Baltimore said, “the tactics used to get us to this point lacked integrity. I will be very very frank. I can’t stand seeing my name up on that board above the recession motion. The motivating group and factors and tactics behind this motion are doing a disservice in my opinion to the farmers of the state of Iowa.”

Other members of the House said that without knowing what the chamber’s recommendations were for the $34 million in budget cuts for fiscal year 2018, it would be unwise to allocate new money this early in the session. Other members said that the Senate bill wasn’t a compromise and that the bill still left many questions unanswered about addressing water quality in the state. Baltimore went so far as to question the governor and the Senate’s intentions of “continuing the conversation” on water quality either in 2018 or 2019.

“Only this last week have I heard comments coming from the Senate saying ‘oh yeah they’re going to work on stuff,’” Baltimore said. “Well if it wasn’t a priority for them last year, why in the heck what it be a priority now? I will be literally shocked if any substantive bill comes out of this session in terms of improving Senate File 512, because if it could have been done, it would have been done right now, but there is an organization that doesn’t want that to happen.”

Wills said that he has several bills in a draft state that address three core issues that the Senate file fails to address, including allowing rural water associations to access the program dollars, allowing industries outlined in the INRS to use the funding, and allowing the state to have access to private conservation practices used on private lands. Wills did not have a timeline for when these bills would be ready to circulate.