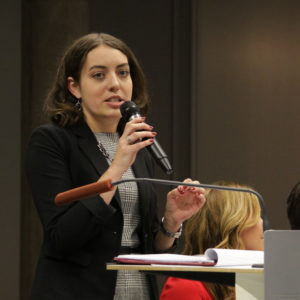 Lindsay Paulson, manager for the member services area of the Iowa Medicaid program was the meeting's facilitator. The panel of state and healthcare officials did not respond to comments aired by patrons. ETHAN STOETZER/InsideSources
News

Over 100 Iowans attended the state’s final Medicaid Public Comment meeting of 2017, on December 5, 2017 at the Des Moines Public Library, venting their frustrations and criticisms with the state’s privatized Medicaid program, less than 30 days after AmeriHealth Caritas’ departure left only two managed care organizations (MCOs) in the market.

Lindsay Paulson, manager for member services area of the Iowa Medicaid program served as the event’s facilitator, which featured two hours of public comment. Alongside Paulson was a panel of state and healthcare officials including: Matt Highland, public information officer for the Iowa Department of Human Services (DHS), Maria Bentrott, policy adviser for the state, and Paige Pettit, a representative of UnitedHealthcare.

These officials did not respond to comments, as outlined in the policy of the meetings that have been held monthly since March of 2016. Patrons were told that if they had questions, they could speak with the panel after the conclusion of the meeting. These meetings were first established as a way to provide oversight for the managed care Iowa Healthlink Program. All feedback from the public is presented to the Medical Assistance Oversight Committee, which then makes policy recommendations to DHS.

Comments ranged from the personal to the procedural, with many declaring the move to privatization as a failure and a complete disregard for poor and disabled Iowans.

“I mean, what action have you taken from our comments that you take back to you little council board?” said Amanda Blackford, “I don’t get it. You know how many people in this room don’t get it? You know, because we’re not seeing change, there’s been no change, in fact it’s gotten worse and you took away our choice. And this is the problem that so many of us have to face day after day, this Medicaid debacle. It’s just been one fight after the other and it’s just been a constant battle and guess what? We’re tired out here. We’re sick and tired of our lives meaning less than day old freaking bread.”

Less than two weeks before the comment meeting, MCO AmeriHealth Caritas left the Iowa Medicaid program, leaving only two MCOs (UnitedHealthcare and Amerigroup) to handle nearly 215,000 displaced enrollees. Since AmeriHealth Caritas’ departure, Amerigroup has announced that it can take on no new members until it gathers the resources necessary to handle increased caseloads, leaving nearly 10,000 members who had chosen to enroll in Amerigroup, to be placed on the Iowa Medicaid Enterprise (IME) fee-for-service plan, which will be not be available for the remaining 213,000 Iowans who will have to enroll through UnitedHealthcare.

Here is a roundup of the various comments shared throughout the night:

Many spoke about problems they’ve had with the MCO program when it comes to providing care for disabled relatives. One of the many criticisms of the privatized system is that it doesn’t allow for relatives of enrollees to be caregivers, making it hard for the enrollees to have constant care, for those that require it.