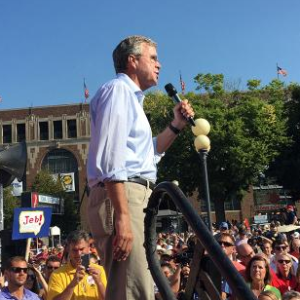 Former Florida Gov. Jeb Bush is following brother and former President George W. Bush’s national security lead in his own bid for the White House, calling for greater surveillance authority for the National Security Agency months after Congress voted to take them away.

“There’s a place to find common ground between personal civil liberties and NSA doing its job,” Bush told a national security forum in South Carolina Tuesday. “I think the balance has actually gone the wrong way.”

The 2016 Republican primary contender added he thought Congress made the wrong call in May when the Senate passed the USA Freedom Act, shutting down NSA’s bulk telephone metadata collection program. Bush said the government should be working to expand the signals intelligence agency’s surveillance powers — including those of Americans — and cooperating with technology companies directly to facilitate surveillance and combat ‘evildoers.’

The bill reformed Section 215 of the Patriot Act, passed under his brother’s administration in the wake of Sept. 11, 2001 to prevent NSA from collecting and storing all Americans’ landline telephone records. Under the new program, which takes effect later this year, telephone companies will store those records themselves, and grant access to the NSA when the agency acquires a warrant from the Foreign Intelligence Surveillance Court.

Prior to the Freedom Act vote, a federal appeals court ruled the program illegal based on the government’s legal interpretation of Section 215.

The Senate has yet to vote on the second of Bush’s proposals — coordinating directly with tech firms to prevent attacks, which Republican leaders in the upper chamber are working to implement via the Cybersecurity Information Sharing Act (CISA).

The bill would legally allow companies to share data about cyberattacks and hacker intrusions launched against them with federal intelligence, law enforcement and defense agencies. Republicans were planning to vote on the bill prior to the congressional August recess, but opposition from Democrats and civil liberties advocates, who claim the bill will open the door to more mass government surveillance, pushed a floor vote to September at the earliest.

“Potential recruits of ISIS, ready for their own taste of violence, can even follow it all on social media,” Bush said. “It’s a time when mass murders have Twitter handles, Facebook, and Instagram pages, using these to add the veneer of glamour to their exploits.”

“We need to work with the owners of these relevant companies to give careful thought on how we address this problem.”

Lawmakers in the upper chamber are addressing the issue through a separate measure tacked onto the 2016 Intelligence Authorization Act, requiring companies to report terrorist activity on their networks.

A similar grouping of civil liberties advocates and Democrats oppose the provision, while some of the biggest companies compelled to act under the provision have yet to take a public stance.

Tuesday’s comments aren’t the first that Bush has made in defense of bulk surveillance programs revealed through leaks of classified documents by former NSA contractor Edward Snowden. In February, months ahead of deadline to renew expiring provisions of the Patriot Act — including Section 215 — Bush called the metadata program “hugely important.”

“That requires responsible intelligence-gathering and analysis, including the NSA metadata program, which contributes to awareness of potential terrorist cells and interdiction efforts on a global scale,” Bush said during a foreign policy speech. “For the life of me, I don’t understand [how] the debate has gotten off track, where we’re not understanding and protecting — we do protect our civil liberties, but this is a hugely important program to use these technologies to keep us safe”

The former Florida governor repeated those sentiments in April by signaling his approval of the Obama administration’s support for NSA.

“I would say the best part of the Obama administration would be his continuance of the protections of the homeland using the big metadata programs,” Bush said on a radio interview, adding that President Obama “enhanced” surveillance programs, despite the fact that he “never defends them or openly admits it.”