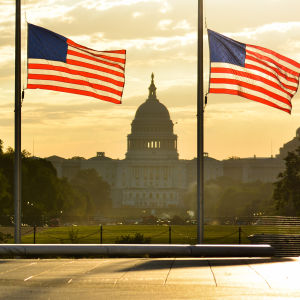 The U.S. Senate on Tuesday voted 67-32 to pass the USA Freedom Act National Security Agency reform bill without any amendments to the House version of the bill, just two days after the expiration of Patriot Act provisions authorizing NSA’s bulk telephone surveillance program.

Tuesday’s vote followed a contentious Sunday session in the upper chamber, where Republicans led by Majority Leader Mitch McConnell repeated their attempt to pass a short-term clean extension of Patriot Act Section 215 and two other provisions, which legally underpin the collection and storage of all Americans’ landline telephone metadata, wiretaps on suspected terrorists’ communication devices and surveillance of suspected terrorist targets unaffiliated with known terrorist networks.

After failing to pass the two-week extension meant to give lawmakers more time to debate the renewal — an effort largely led by fellow Kentuckian and 2016 presidential contender Rand Paul — McConnell gave the chamber a second chance to vote on the Freedom Act, which renews the expiring provisions while reforming the bulk telephone metadata program.

McConnell and a large majority of Senate Republicans are opposed to the bill, which passed in the House last month by a wide 338-88 bipartisan vote. Tuesday voting on the bill included a round of amendments proposed by McConnell and Republicans, which Democrats described as an attempt to undermine surveillance reforms.

“We all knew that section 215 would expire on June 1, that’s why we started working to change it,” Vermont Democratic Sen. Patrick Leahy, one of the bill’s chief sponsors, said on the Senate floor Tuesday. “We also know the Second Circuit court decision made part of the program illegal.”

“Now if we start amend it, we don’t know how much longer its going to take, and we end up with no protections.”

The first of the four amendments delayed the transition from the NSA’s bulk collection and database storage model to a model in which telephone companies themselves retain the data, and the government goes through a specific selection term and query process to access it. The bill sets the timeline for such a transition to six months — a transition window already endorsed by NSA Director Michael Rogers — while the amendment pushed it back to a year.

“Some like me have wondered why it is we’re trying to fix a system that is not broken, as there’s no documentation of any abuse,” Senate Majority Whip John Cornyn said on the Senate floor Tuesday, arguing Republicans’ case for the amendments.

“The Senate should not be a rubber stamp for the House,” Cornyn said.

According to the Texas Republican, the storage of phone records is better left in the hands of government officials with security clearances than in those of telephone company employees, where they could be abused.

“I don’t know why they would object to a little bit of time,” Cornyn said.

A second amendment altered the original bill’s addition of a privacy and civil liberties advocate to the Foreign Intelligence Surveillance Court (FISC), who would be called in to review surveillance requests presenting “a novel or significant interpretation of the law” by law enforcement or intelligence agencies, and argue against anything deemed in violation of privacy.

Republicans’ amendment to the provision limited the advocate’s access to information regarding such requests from the court, and eliminated the requirement that the court issue a written explanation when it chooses not to appoint a  privacy advocate — changes Democrats described as an attempt to reduce the secret court’s transparency.

Cornyn argued putting a “defense attorney” in a courtroom meant to approve ongoing investigations creates a conflict of interest that could hinder active efforts to prevent terrorism.

“We want to treat intelligence gathering like ordinary law enforcement,” Cornyn said. “That’s far different than what our intelligence community is supposed to be doing — stopping them before they ultimately occur. That’s what we learned in 9/11.”

“Oversight of these programs is absolutely rigorous — its executive, judicial and legislative oversight. It’s not a matter of trust, its universally verified and you have to go before these judges to make your case,” Cornyn added. “And unless you can convince these judges, they will shut it down.”

The third amendment required Internet and telecommunications companies to give the U.S. attorney general 180-days notice if they plan to change their data-retention policies to hold customer data less than 18 months.

Opponents argued the government has no right to force companies to hold onto data, especially since many already do so for years at a time. Cornyn warned without data-retention requirements, which are not included in the original bill, companies could seek to solicit customers by offering to delete their data. Director of National Intelligence (DNI) James Clapper recently told Congress that the data retention amendment was unnecessary.

The fourth amendment removed the requirement for the DNI to declassify or summarize and publicly release all significant FISC court orders, which opponents described as another attempt to limit transparency.

“This accountability provision is one of the most essential aspects of the USA Freedom Act,” Mike Godwin and Nathan Leamer of the R Street Institute wrote in a statement Tuesday. “Releasing significant FISA Court decisions is essential to ensure the government and the FISA Court are interpreting the surveillance authorities as Congress intended. It also is key to combat increasing government reliance on secret law, which has been used to justify massive spying programs that Congress did not intend.”

All of the amendments were defeated by a majority vote before final passage of the House bill.

“This bill protects American national security, and does so in a way that protects Americans privacy interests,” Utah Republican Sen. Mike Lee, who co-sponsored the bill with Leahy, said on the Senate floor Tuesday.

Lee said Congress had four years to debate the expired provisions since their last renewal, and that the time had come to pass reforms without any further delay.

“Those type of calling data — even the data itself — reveals a lot about an individual — political preferences, religious views, marital status — all kinds of information that is none of the government’s business,” Lee said. “Send us all your data, on all of your calls, made by all of your customers, regardless of any connection to any terrorist investigation — this is wrong.”

“Our privacy, is in fact, part of our security,” Lee added.

Lee and others warned their fellow lawmakers that tacking on amendments to a bill passed in its present form by a supermajority of the House threatened an eventual conference with the House, which in turn meant the continued expiration of the surveillance authorities altogether.

“Whatever the outcome of this vote, and those votes that will follow later today, the American people deserve better than this,” Lee said.

Though the ongoing telephone metadata program was officially shut down by the NSA on Sunday at 7:44 p.m., a provision in the Patriot Act allows investigations begun before the sunset date to continue.