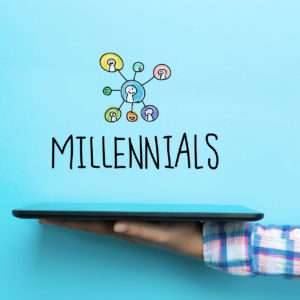 Today’s young adults value their studies highly—a larger percentage earn four-year-degrees than their grandparent’s generation did—but that does not necessarily mean that they are better off, according to a government report released last week.

The study, “The Changing Economics and Demographics of Young Adulthood: 1975-2016” was issued by the U.S. Census Bureau last Wednesday. The author, Jonathan Vespa, studied changes over time in marriage rates, living arrangements, educational levels, and financial independence among young adults, or those between the ages of 18 and 34.

Hidden in the top line finding, reported elsewhere, that “millennials,” or the current crop of young adults, earn less than baby boomers did at their same age, are big improvements among educational attainment and earnings for young women. According to the report, the percentage of women with four-year-degrees increased from 18.4 percent in 1975 to 40 percent in 2016, and their median personal income increased by just under $7,000 to $29,429 in that time-span. Overall, the median income for young adults dropped just over $2,000 from $36,858 to $34,837 (after adjusting for inflation) meaning that while men still earn more than women, their overall earnings outlook is getting worse.

The changing trends in educational outcomes and professional opportunities for young people have correlated to major shifts in how they organize their family life. Millennials are getting married later and are more likely to live at home than previous generations. These changes correspond to findings that millennials believe that finishing their formal schooling is the most important milestone to surpass along the transition to adulthood.

The study also dispels the myth that better educated women have a harder time finding a spouse, though again, women in this category are getting married later in life.

According to the study, “a woman with a college degree is less likely to be married by the age of 25 than one with only a high school diploma. By the age of 35, the pattern has reversed: the college-educated woman has a greater chance of being married and staying married than women with any other educational background.”

Another concerning statistic for some is the sharp increase in the number of young people living at home with their parents, from 14.7 million in 1975 to 22.9 million in 2016. Even more concerning, is the finding that a full quarter of the 8.4 million older millennials between 25 and 34 who live at home are “idle,” meaning that they neither work nor attend school. While the report cites high rates of disability and child-care providers in this population, there is arguably ample opportunity for the economy to improve in workforce participation for this population.

One solution proffered by policy-makers is reducing the stigma associated with blue-collar jobs. While there has been a rush in emphasis on getting students through four-year liberal arts degree programs, many argue that vocational training, often offered by two-year public universities or for-profit colleges, could be better suited for an economy thirsty for applicants with technical skills. Some have also suggested that the mounting pressure of over a trillion dollars in outstanding student loans would be alleviated if more young people targeted skills-based training. There is growing momentum to address the skills gap at the federal level, especially as Congress is expected to reauthorize the Carl D. Perkins Career and Technical Education Act in the coming months.

Despite their economic woes and shifting attitude toward marriage, millennials are still entering long-term relationships and having children in large numbers, according to the study. The report’s author argued that this is part of a trend in which millennials see marriage as a final stop on the journey to adulthood, rather than an early milestone to surpass:

“Having a history of work experience, and presumably savings and financial security, as a prelude to settling down suggests that marriage is a capstone experience, one that comes after (sometimes years after) young people feel financially secure.”