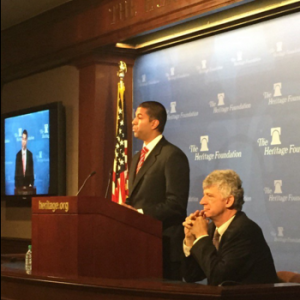 Federal Communications Commissioner Ajit Pai marked the first anniversary of the FCC’s divisive net neutrality Internet regulations, passed a year ago Friday, by predicting their demise in the courts, Congress or at the agency itself.

“One year ago today, the FCC decided to join 20th century regulation and the 21st century Internet together in not-so-holy matrimony,” the Republican commissioner told a crowd gathered at the Washington headquarters of the conservative policy group Heritage Foundation Friday. “It’s fitting that the traditional one-year anniversary gift is paper — for that’s pretty much all that utility-style regulation has produced over the last 12 months.”

The regulations banning Internet service providers from blocking, throttling or prioritizing web traffic, passed via a partisan commission vote, have “been a gift to the legal profession” according to Pai, pointing to the pending court challenge by the broadband and wireless industries and the litany of legal counseling providers have testified seeking to ensure they’re in compliance.

“For most Americans, the marriage has been a dud,” he said.

Citing a Pew Research Center report from December Pai said “home broadband adoption seems to have plateaued” with more than 9.6 million Americans having surrendered home broadband connections between 2013 and 2015 — a 3 percent change.

“At larger ISPs, growth in broadband investment has also flatlined,” Pai said. “That’s only happened twice before on a year-over-year basis: following the dot com bust in 2001 and after the Great Recession in 2008.”

“Indeed,” he continued, “economist Hal Singer has shown that the Obama administration has now overseen the first-ever reduction in year-over-year investment by major ISPs that happened outside a recession, one which ‘just happens to coincide with the Title II era.'”

Though the Pew report goes on to attribute some of that to the percentage of “smartphone-only adults,” which rose 5 percent from 2013 to 2015, other economists found declines in broadband investment of 12 percent in 2015, while others argue the reduction was attributable to long-term plans AT&T made years before the FCC even announced the rules.

While most economists agree it’s too soon to measure any changes in the level of network investment and growth by wired and wireless providers, Pai predicted such a decline a year ago when a he came out against “President Obama’s plan to regulate the Internet” — a reference to the president’s public message to the FCC in late 2014 to adopt strong net neutrality rules on wired and wireless ISPs.

“Left to its own devices, the FCC never would have married utility-style regulation to the Internet,” Pai said, referencing FCC Chairman Tom Wheeler’s initial disinclination to reclassify ISPs as public utility common carriers, the designation shared by telephone networks, under Title II of the 1996 Telecommunications Act. “But unfortunately, the FCC was dragged to the altar kicking and screaming by the White House.”

Since adoption, the rules have opened up a Pandora’s Box of questionable regulatory jurisdiction for the FCC, including setting customer data privacy standards for ISPs (an authority it usurped from the Federal Trade Commission), exempting smaller providers lacking resources to ensure compliance and regulating providers for zero-rating — or exempting certain forms of data — from customers’ monthly download allowance.

The FCC has already opened an investigation into T-Mobile’s Binge On program, which exempts certain video streaming content from users’ monthly data caps.

“In November, agency leadership called the program ‘highly competitive and highly innovative,'” Pai said. “Just one month later, after pressure was applied by many of the same special-interest groups that demanded utility-style regulation in the first place, the FCC flip-flopped. It opened an investigation into whether Binge On violated the new Internet conduct standard.”

“And now,” he continued, “net neutrality proponents claim that letting consumers watch online video for free is ‘discriminatory,’ ‘limits user choice,’ and ‘stifles free expression.’ Some even argue that such a practice, known as zero-rating, is a human rights violation!”

Verizon, AT&T and Facebook have rolled out similar services, which pro-net neutrality digital rights advocates argue is a form of throttling and favoring certain content — one of the three bright line rules forbidden in the Open Internet Order.

Others say alleviating data caps helps consumers make more use of their data and reduces caps and overage fees that hinder lower-income portions of the population from maximizing web access.

“As predicted, the FCC’s decision is having a disproportionate impact on our nation’s smallest ISPs,” Pai said. “Many of them have reduced investment in the communities they serve because of the FCC’s decision to treat the Internet like a 19th century railroad or 20th century water company.”

Several smaller providers testified to delaying, reducing or canceling expansion plans to Congress in November, and in December the FCC extended the small business exemption from the regulations for another year. On Thursday the House Energy and Commerce Committee approved a bill that would give smaller providers a five-year extension, which some Democrats argue leaves the door open for smaller providers to take advantage of customers.

Though the FCC has yet to actually set standards for data privacy regulation, the agency has already engaged in enforcement action against multiple companies for mishandling customer data. A coalition of service and edge providers recently wrote to the agency over concerns that without clear rules in place like those previously overseen by the FTC, companies could suffer steep fines and penalties.

“In theory, an online privacy rulemaking is coming,” Pai said. “It’s been promised — repeatedly. First, it was coming ‘in the fall.’ Once fall came, it was expected ‘in the coming months.’ And then it was due by the end of ‘football season.'”

“With the Super Bowl behind us, one wonders if Opening Day of baseball season will be the next target,” Pai said referencing Wheeler’s repeated delays. “Until then, ISPs and their customers must simply guess what the rules may be.”

The fate of the rules themselves is still uncertain, with a decision over their legality pending in the D.C. Circuit Court of Appeals this spring.

“The D.C. Circuit is weighing arguments that the FCC exceeded its jurisdiction; failed to justify its case with substantial evidence; never gave the public the notice-and-comment opportunity required by the Administrative Procedure Act; breached the First Amendment; and violated the statute by reclassifying mobile broadband Internet service,” Pai explained. “Those are five meaty arguments, and proponents of Internet freedom need to win just one of them.”

If the court upholds the rules, the Republican-controlled Congress could also provide recourse. Senate Commerce, Science and Transportation Committee Chairman John Thune has been working on a bill for months to establish net neutrality protections while abstaining from Title II reclassification, and on Thursday Sens. Mike Lee, John Cornyn, Tom Cotton, Ted Cruz, Rand Paul, Marco Rubio and others introduced a bill to repeal the rules entirely.

“And, of course, a future FCC could return us to the bipartisan consensus that the Internet is best left unfettered by invasive regulation,” Pai said. “So I am optimistic.”