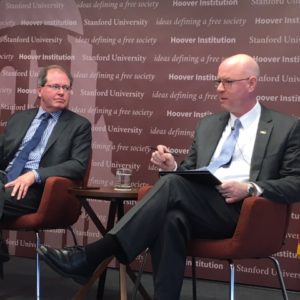 Thomas Carroll (left) of Invest in Education and Neal McCluskey (right) of the Cato Institute square off in school-choice themed debate in Washington D.C. on April 25, 2017. (Leo Doran/InsideSources).
News

Libertarians harboring suspicions of the federal government are bucking establishment GOP leaders and vowing to oppose a nationalized school choice proposal backed by the Trump administration. Though they support the school-choice doctrine in principle—which calls for empowering parents and students to choose among traditional public, public charter, private, and alternative educational options—some federalists are worried that a Washington-run program would necessarily result in regulatory mission creep.

The worst kept secret in education policy circles in Washington is that the Trump administration is eyeing a tax-credit scholarship program to satisfy a $20 billion school choice campaign promise. The program would be modeled on those in states like Arizona or Florida, which allow individuals and businesses to deduct contributions to accredited non-profits that award educational scholarships to K-12 students. Details on the federal proposal can be expected to emerge on Wednesday, when the president has said that a larger tax overhaul agenda will be unveiled.

In theory, the proposal is appealing to many mainstream conservatives because it could be sold as a tax break, rather than a spending increase. Furthermore, many on the right say that the national program would break up the public school system’s hegemony over education by allowing students to homeschool or attend private schools (including religious options). Liberals and the teachers’ unions largely oppose the initiatives on the grounds that they are “vouchers in disguise,” intended to privatize the school system by diverting public school dollars to private schools.

The first of two panels at a Tuesday event, “A $20 Billion School Choice Tax Credit Program: Yes, No, Maybe, How So?” pit a pair of school choice supporters against each other on whether the federal government should take the lead in the policy area from the states. The event was organized by the Fordham Institute, and hosted by Stanford University’s Hoover Institution, both of which are right-leaning public policy think tanks active in the education policy space.

Neal McCluskey, the director of the libertarian Cato Institute’s efforts in education, argued during the first panel that backing the GOP proposal would be a political, strategic, and legal mistake. In a six-point opening statement, McCluskey’s primary arguments stemmed from his reading that the Constitution does not give the federal government the power to regulate education. The issue should be left to the states, he said.

The libertarian scholar also expressed the worry that if private schools were to begin accepting students participating in the government-regulated scholarship programs, the funds connected to those students would also come with strings attached. Even if Congress passed an ostensibly “clean” school choice law without regulatory requirements, McCluskey said that the door would be wide open for a future big-government liberal administration to adulterate the system.

McCluskey’s concern, which is also shared by the homeschooling lobby, revolves around the idea that once private schools start accepting federal scholarship dollars, they would be unable to wean themselves off—and would then be at the mercy of federal regulators. Washington could then force the schools to make curricular and religious concessions or face losing a major source of income, according to his reasoning.

Finally, McCluskey raised the argument that for a school choice supporter, injecting the toxicity of high-stakes national politics into what has historically been a locally-driven bipartisan issue is a mistake. He questioned whether it makes sense for Republicans to link the school choice movement, which has on-the-ground appeal in deep-blue urban inner cities, with the Trump brand.

Since the inauguration, McCluskey said, “Now we are having to fight a much bigger, much more national debate which requires a lot more resources and a lot more time.”

“Is this ultimately going to be good, politically, for the cause of school choice?” he wondered.

Thomas Carroll, the president of the non-partisan school choice advocacy Invest in Education, disputed many of McCluskey’s assertions, and gave tentative support to a push for national school choice. His main argument was that the combination of Republican majorities in both houses of Congress and a Republican president gives school choice activists a “once-in-a-lifetime” opportunity to pass legislation over the teachers’ unions’ objections.

Carroll said that, like McCluskey, he would only support a national tax credit scholarship program that comes without onerous regulations. Carroll also conceded that there was a risk of the federal government using the program in the future as an excuse to interfere in private schools, but he also noted that most such K-12 schools already take federal dollars for low-income students, so that threat already exists anyway.

Carroll argued that because the progressive interests backed by the unions would always be a threat to the right’s school choice agenda, conservatives should instead capitalize on political tailwinds and focus on passing the school choice initiative—and then dig in for a long defensive fight.

“I like to joke that after a nuclear attack, the only thing left will be cockroaches and the teachers unions… I say that actually with admiration,” said Carroll to the audience’s laughter.

Carroll also disputed McCluskey’s argument that the federal education department’s role is unconstitutional, by pointing to the fact that the courts have not struck down its core functions in the decades it has operated since the Carter administration.

Two more school choice proponents followed Carroll and McCluskey on stage for a second panel oriented toward coloring in the wonky details of what an effective school choice tax credit scholarship program would look like. One of the participants, Travis Pillow, the editor of the Florida-based conservative educational news outlet redefinED, fielded a question from InsideSources during a question and answer portion of the event that further illustrated the political complexities for Republicans hoping to act on the president’s agenda.

When asked whether opposition from rural conservatives, who tend to be more attached to their public schools, poses a threat to the passage of school choice legislation, Pillow answered affirmatively:

“Rural Republicans are a big barrier to the advancement of the school choice movement at the state level right now,” he said, pointing to recent legislative defeats in states like Arkansas and Texas.

Regardless, Pillow argued that the concerns expressed by those lawmakers about the impracticality of school choice in rural areas mostly don’t hold water. He cited the example of high usage of Florida’s tax credit scholarships in rural counties, particularly for students seeking to attend private schools, as evidence.

One element that could work in the school-choice coalition’s favor is the widespread expectation that the tax credit scholarship will be part of a larger tax reform push, that is (on paper) agreeable to all of the Republican conference. The hope is that the measure can pass under-the-radar with the help of sweeteners in other areas of the overhaul.

Nonetheless, if considered in isolation, a national school choice tax credit scholarship initiative would likely be a heavy lift for mainstream GOP leaders acting on their own.