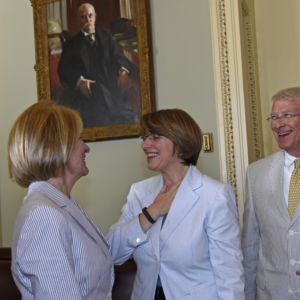 A Republican and Democrat in the Senate want the federal government to measure the economic impact and deployment of broadband in the U.S. the same way it tracks other industries.

“Broadband connectivity has the power to unleash jobs and fuel economic growth throughout the country, especially in rural areas like West Virginia,” Capito said Wednesday. “This legislation will provide the data needed to measure the benefits of broadband accessibility and the importance of investing in critical broadband infrastructure.”

Klobuchar added the bipartisan bill “will help provide us with the reliable, publicly available economic data we need to make informed decisions about expanding broadband, connecting our communities, and keeping us competitive in an increasingly digital world.”

Both are members of the Senate Broadband Caucus, formed last summer to advance policies aimed at expanding broadband deployment. Its members hail from states with large swaths of rural communities where high-speed internet is a limited commodity compared to metropolitan areas. Most of the U.S. population has only one choice for a broadband providers according to the FCC. Rural areas often have no choice or less efficient technology like wireless broadband.

Capito’s state in particular has been highlighted as a focus area by the Federal Communications Commission, which promotes rural broadband deployment via its Universal Service Fund (USF). The USF provides funding to small broadband providers to help expand their networks to rural, under and unserved areas of the U.S.

Commissioner Ajit Pai, the new chairman of the FCC designated by President Donald Trump, visited West Virginia and other rural communities last year to hear the difficulties they face trying to keep pace with the digital economy.

Closing that digital divide is the focus of Pai’s chairmanship, and he wants help from Congress. In his first major policy speech Wednesday Pai asked Congress to include broadband in the $1 trillion infrastructure package Trump is asking for. He wants the FCC to take charge of where the funds go through USF, and asked Congress to include in the measure his plan for bringing gigabit internet speeds to the most economically depressed communities across the country.

The plan to create such “gigabit opportunity zones” grants tax subsidies to broadband providers who build high-speed networks in low-income neighborhoods, clears the local government red tape providers have to wade through to start construction and offers tax credits to tech startups opening their doors in those areas.

“Just last week, a study of broadband deployment in Cleveland suggested that fiber was much less likely to be deployed in the low-income neighborhoods,” Pai said Wednesday. “This highlights the need to establish gigabit opportunity zones, which would give the private sector the incentives to expand next-generation networks into high-poverty areas and help revitalize them.”

“Smarter regulations, modernized subsidies, updating the law—those are some of the ways we’ll work to close the digital divide,” he added.