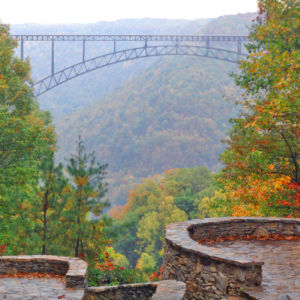 A stone terrace serves as an overlook of the New River Gorge Bridge in Fayetteville, W.Va. (AP Photo/Jeff Gentner)
News

FCC Commissioner Stumps for Rural Broadband, But Not for Government Networks

In an op-ed out this week, the two recounted meeting with residents and local businesses in the Mountain State to hear their frustrations trying to keep pace with the increasingly connected economy in a state that ranks almost dead last in broadband deployment.

“According to the 2016 Broadband Progress Report, West Virginia is ranked 48th in the nation for broadband availability,” Capito and Pai wrote in The Register-Herald. “Thirty percent of West Virginia residents do not have access to broadband service that meets FCC benchmarks, and in rural areas of the state this number is as high as 48 percent.”

The two met with Mountaineers at New River Gorge, where thousands of tourists come for whitewater rafting, rock climbing and zip lining every season, and where one such local business complained they couldn’t offer WiFi on their 1,500-acre property without incurring an “astronomical” cost to install fiber.

Attendees at the meeting said the spotty connectivity in the predominately rural state kept one local restaurant from updating its table availability online accurately, costing customers. A software developer who moved to the state to work from home said it would cost $33,000 to connect his home to a broadband line 100 yards away.

“We discussed several solutions during last week’s roundtable, including reducing barriers to investing in infrastructure like fiber, streamlining regulations for wireless providers, encouraging public-private partnerships to improve technology, and ensuring accountability regarding taxpayer dollars intended for broadband development,” Capito and Pai wrote. “All of this would promote greater access and competition.”

Pai told the gathering he’s working to speed up the permitting process to bring down the cost of adding broadband infrastructure like service lines and cell towers. Both efforts will help deploy smaller carriers as competitors in underserved rural areas.

Capito made a similar argument in a letter to FCC Chairman Tom Wheeler in July when she helped launch the Senate Broadband Caucus. The bipartisan group of senators suggested the FCC use the fund to help deploy mobile broadband, since wired deployment can be cost prohibitive in rural regions of the U.S.

That tracks with Pew Research data from December that found the number of households adopting broadband had decreased to 67 percent, down from 70 percent in 2013. The number of adults accessing the internet strictly from smartphones rose from 8 percent in 2013 to 13 percent in 2015. According to Pew 15 percent cut the cord at home entirely, with 9 percent never having it at all. Thirty-three percent of Americans said cost was their biggest barrier to getting broadband at home, a tension Pew expected will increase.

Wheeler wants to help underserved areas get online by allowing municipalities in states like Tennessee and North Carolina to expand their own networks outside their territories, a violation of both states’ laws and many others across the country.

Most of those laws were put in place following aggressive lobbying campaigns by existing internet service providers, many of whom have failed to meet the needs of poor and rural communities, according to Wheeler.

“They should be able to make their own decisions about building the networks they need to thrive,” he said last February.

The agency’s Democratic bloc voted to preempt those laws before last February’s landmark net neutrality vote, a move Republicans including Pai said the agency doesn’t have the legal authority to make. The FCC and states argued their cases before a federal court in March, though without the backing of the Justice Department. The DOJ refused to side with the FCC last November despite backing its net neutrality court case in December.

A Taxpayers Protection Alliance July survey found 64 percent of 800 nationwide respondents “would not support their local government going into debt so that it could sell high-speed internet access directly to consumers.” Sixty-five percent believe broadband is coming to every community in the country regardless of what governments do.

The survey was accompanied by a report on failed government-owned networks in 10 states, costing taxpayers $2 billion. Google bought one of those networks, iProvo in Provo, Utah — which cost the city $39.5 million to build — for $1, and added it to its growing fiber network.