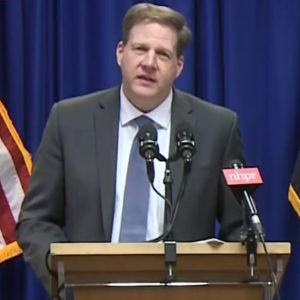 During Tuesday’s coronavirus presser, Sununu was asked about the 9:30 pm curfew Nashua is voting on later that evening. Critics complain that the city’s health officials have failed to offer any evidence indicating the curfew will reduce viral spread. While acknowledging Nashua has the right to impose a nightly lockdown, Sununu said his administration does not have any data indicating it would be effective, or any data on restaurants being linked to significant spread of the virus.

“We don’t have, nor have we provided, any data that restaurants are causing super spreading type events of COVID,” Sununu said Tuesday.

On Monday, more than 100 people participated in an online public hearing over Nashua’s proposal for a 9:30 pm curfew, many of them workers in the restaurant and hospitality industry. They say the curfew will devastate small businesses already weakened by the COVID economy and demanded to know if Nashua health officials had any evidence their plan would reduce spread in a meaningful way.

“They had no data,” Kurt Mathias from the Boston Billiard Club and Casino told NHJournal.

Sununu expressed his doubts as well.

“In terms of whether curfews work or not, I would say this anecdotally: I’ve talked to a lot of folks in Massachusetts where they’ve instituted a curfew. What we’re being told is that a lot of folks, instead of being in a restaurant in larger numbers….what’s happening is those individuals aren’t just going home and saying, ‘well, we’re not going to socialize.’ They’re going to someone’s house.

“And so you’re still getting this spreading type of activity from social gatherings, the same type that they’re trying to prevent [with the curfew], but it’s happening behind the four walls of a private home.”

Massachusetts imposed a curfew more than a month ago, and yet the rate of infection in the Bay State has continued to rise. Their rate of COVID cases per 100,000 population (4.75) is nearly twice as high as New Hampshire’s (2.75). However, in the past week, the infection gap between the two states has narrowed with Massachusetts at 65 cases per 100,000 and the Granite State at 59.

Asked at Tuesday’s presser why he wasn’t supporting more statewide restrictions, including curfews, Sununu pushed back on the premise. “If your argument is that states with more restrictions have lower COVID, that’s absolutely not true. Look at California: Their numbers were up 30 percent last week and they have the most restrictive policies in the country.”

Sununu is actually off the mark a bit. The numbers from California are even worse:

“New coronavirus cases leaped in California in the week ending Saturday, rising 38.9% as 293,381 cases were reported. The previous week had 211,235 new cases of the virus that causes COVID-19.

California ranked No. 2 among the states where coronavirus was spreading the fastest on a per-person basis, a USA TODAY Network analysis of Johns Hopkins University data shows.”

As for Nashua’s curfew, Sununu suggested health outcomes might be better if people are gathering in the controlled confines of restaurants as opposed to at home.

“When you’re in a restaurant setting, you have guidelines that are in place that can allow people to be social somewhat, but still within the parameters that we’ve put forward. I think restaurants have done a good job, and you don’t see those super spreader events.

“If Nashua wants a curfew, that’s their choice. But I don’t know if it’ll have a significant impact on the numbers,” Sununu said.