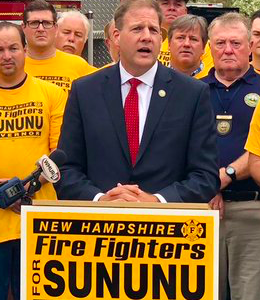 “I am honored to receive the endorsement of the Professional Fire Fighters of New Hampshire. They protect us everyday, and I could not be prouder to stand with them,” Gov. Sununu said. It’s the first time the fire fighters union has endorsed a Republican candidate in the governor’s race since Gov. Craig in 2002, so it’s good news for Gov. Sununu. And great timing, too. 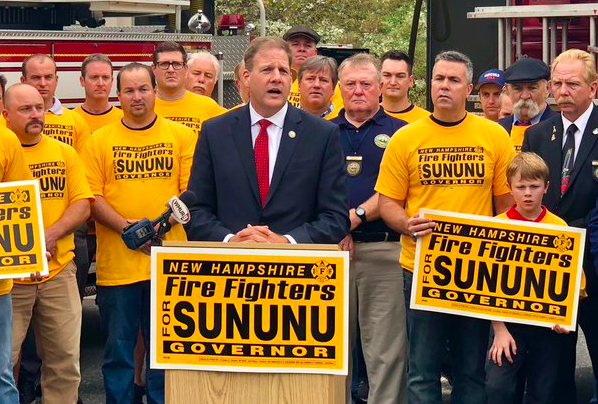 Earlier that same morning, newly-released FBI statistics revealed New Hampshire has the third-lowest rate of violent crime in the country, second only to Vermont and Maine.  “Violent crime was down slightly nationwide, and it was the second year in a row that New Hampshire’s rate decreased,” the Union-Leader reported.

And earlier this summer, analysts at Wallethub.com declared New Hampshire the fifth-safest state in the union, based on low crime rates, safe roadways and workplace safety, among other factors.

This latest spate of good news follows a series of positive data points on New Hampshire’s economy, including record levels of employment, rising wages and the second-highest household income in the nation.  And it’s clear that the Sununu campaign (Motto: “We’re all about the economy, and it’s working!”) sees jobs and the economy as the key to their re-election hopes against Democrat Molly Kelly.

But safe streets and falling crime rates aren’t bad, either. More significantly, it closes yet another lane for Kelly’s campaign. They’re struggling to score points on economic issues. It’s unlikely they’re going to talk public safety in a state already ranked in the top three.

What about guns? Gun control was a hot topic in the Democratic primary, where Molly Kelly touted her support for “keeping military-style weapons off our streets and reinstating the requirement of a permit to carry a concealed weapon.”

“When my four children were growing up, I never, ever worried about them when they went to school whether they would be affected by gun violence. But I worry every single day about my seven grandchildren,” Kelly said.

The job of every challenger is to explain why voters’ lives would be better if they took a risk and got rid of the incumbent. That’s an uphill climb for Kelly.

The challenge for any incumbent Republican in the era of Trump is to have enough broad-based support to survive a likely anti-GOP wave in November. By every measure, it’s going to be a bad year for Republicans. However, there are two areas where the GOP still has an edge over Democrats in national polls: Peace and prosperity.

At the moment, Gov. Chris Sununu is doing well on both.