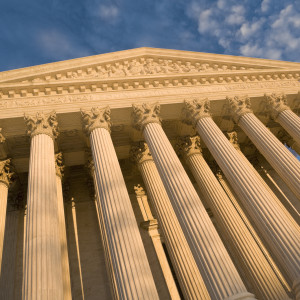 Supreme Court to Decide the Future of Patent Lawsuits in Apple v. Samsung

Apple and Samsung will face off in the final battle of their five-year patent war in the Supreme Court this year, where judges will decide if patent infringement can cost a company the entire profit of an infringing product.

The court based its ruling on a portion of the hundreds of years old Patent Act, under which a party convicted of copying a design patent can be made to turn over the “entire profit” of an infringing product.

Some of the biggest names in the tech industry have already weighed in on the side of Samsung, which argues smartphones are too complex and made up of too many differing parts and features to justify turning over a product’s entire profit for a few copied features.

“A patented design might be the essential feature of a spoon or rug. But the same is not true of smartphones, which contain countless other features that give them remarkable functionality wholly unrelated to their design,” Samsung said in its petition to the court, which hasn’t heard a case on the infringed appearance of a product, rather than its functionality, in more than 100 years.

They further warn allowing such a high-profile ruling to stand will encourage so-called patent trolls to acquire or file broadly worded patents for products they don’t intend to build, and sue manufacturers of actual products for infringement.

A large swath of the tech industry contends the case left as is could set off an explosion of patent infringement lawsuits that would stifle innovation by raising the risk of releasing new products and putting smaller companies, unable to fund long court battles, out of business.

According to Apple, Samsung should be made to compensate the company for copying design elements of the iPhone that cost billions in research and development and single-handedly transformed the mobile phone market.

“The iPhone’s explosive success was due in no small part to its innovative design, which included a distinctive front face and a colorful graphical user interface — features protected by U.S. design patents,” Apple wrote in its rebuttal to Samsung, where it labeled Samsung handsets “iPhone clones.”

“It really would make no sense to have hundreds of patent holders each being able to make claims on the entire profits of a complex product,” Matt Levy, patent counsel for the Computer & Communications Industry Association said Monday. “We believe, and we argued this in our brief, that the lower court overreached in an unconstitutional way by expanding a patent on the outer case of a smartphone to cover the value of the entire product — rather than just that feature.”

“This legal interpretation is unreasonable and, if left to stand, will have far-reaching, negative implications not only for the high-tech sector, but also for American businesses and consumers,” Sparapani, who also served as Facebook’s public policy director, said Monday. “The Supreme Court has taken the next step in clarifying design patent infringement damages by its announcement to review the Apple-Samsung case.”

Google, Facebook, Dell, HP, eBay, Vizio and others sided with Samsung in a friend-of-the-court brief for the second time in January.

“The Federal Circuit’s decision is deeply flawed,” the companies wrote. “If allowed to stand, it will lead to absurd results and have a devastating impact on companies … that spend billions of dollars annually on research and development for complex technological products and their components.”

The ruling originated in the U.S. District Court for Northern California, where nine jurors found Samsung infringed on six of seven Apple patents, including the rectangular shape and rounded corners of the iPhone and the shape of its app icons. The court ordered Samsung to pay Apple an initial damage assessment of $1.05 billion, later revised down by the federal court.

The same court banned the sale of the infringing phones earlier this year.