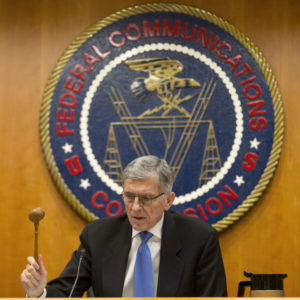 Federal Communications Commission Chairman Tom Wheeler announced Thursday he will leave the agency with the Obama administration in January, setting the Trump administration up for a Republican majority already vowing to undo Wheeler’s legacy on day one.

The announcement came shortly before the FCC’s December open meeting and almost a week after the Republican-controlled Senate left town without reconfirming fellow Democratic Commissioner Jessica Rosenworcel, whose term ends at the beginning of January. The departure of two of the agency’s three-Democrat majority ensures Republican control that conservative groups were skeptical Wheeler would give up.

“Serving as FCC chairman during this period of historic technological change has been the greatest honor of my professional life. I am deeply grateful to the president for giving me this opportunity,” Wheeler said in a statement. “It has been a privilege to work with my fellow commissioners to help protect consumers, strengthen public safety and cybersecurity, and ensure fast, fair and open networks for all Americans.”

Those and other divisive rules were passed along 3-2 party line votes Wheeler set a modern record with, a record Republicans say will be easy to dismantle when they take control next year.

“Like his beloved Ohio State Buckeyes, Chairman Wheeler brought passion and tenacity to the playing field each and every day,” Republican Commissioner Ajit Pai said in a statement. “Despite our differences in many areas of communications policy, I commend him for his years of public service. It has been a privilege to serve alongside him, and I wish him well in his future endeavors.”

Either Pai or his Republican colleague Commissioner Michael O’Rielly will take over as chairman after Wheeler’s departure, and begin a “shift from playing defense at the FCC to going on offense” and “remove those rules that are holding back investment, innovation, and job creation,” according to Pai.

Republicans declined to renominate Rosenworcel in part over fears Wheeler would stick around until the end of his term in 2018, blocking Republicans until Trump could nominate a Republican replacement for Democratic Commissioner Mignon Clyburn when her term expires in June. Wheeler laid their concerns to rest Thursday, following through on his pledge to lawmakers earlier this year to ensure a smooth transition and giving Republicans a 2-1 majority on January 20 when Trump takes office.

“It’s been an honor, a privilege and a wild ride serving here as commissioner at the Federal Communications Commission,” Rosenworcel said during Thursday’s meeting. “Thank you to the chairman for what has undeniably been an activist agenda.”

In a press conference following the meeting Wheeler said he gave Senate Republicans assurance he would follow precedent and ensure a smooth transition earlier this year. It wasn’t his lack of a departure date that sank Rosenworcel’s renomination, the chairman said, but rather Republicans including Wisconsin Sen. Ron Johnson’s call for a day-one majority.

“I know this will surprise you — I had hoped for another outcome, and working with that transition,” Wheeler said, indicating he may have stayed on longer to work with a Hillary Clinton FCC. “But the American people decided they wanted something else, and I’ve stuck with my commitment.”

The chairman said he’s already had meetings with Trump FCC transition team members including communications industry consultant, AEI fellow and net neutrality opponent Jeff Eisenach, but wouldn’t comment directly on how the next FCC should approach his legacy.

“I have strong feelings about the importance of government, the decisions we made and the over-simple, potentially harmful desires of those who have defined their success in terms of a return to policies that are unfit for the 21st century,” Wheeler said. “However this is not the forum for that discussion.”

In its last meeting chaired by Wheeler, the FCC voted to let wireless carriers replace outdated text telephone communications with internet protocol-based real-time text, which allows characters to be sent as they are created without hitting send and during voice calls. The changes will help those with hearing and vision disabilities, especially in the case of 911 calls.

With regard to what may be Wheeler’s last controversial act as chairman, he said the FCC was waiting to decide whether to charge AT&T with violating net neutrality until it receives a response from the carrier to its last letter. The FCC gave AT&T until today to respond to questions about its zero-rating DirecTV service, which it previously speculated ran afoul of net neutrality rules against anticompetitive practices and web traffic prioritization.