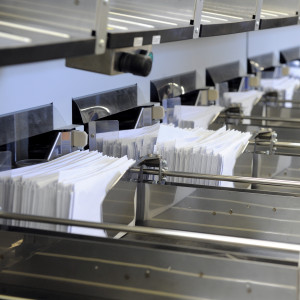 Each year, the United States Postal Service (USPS) must submit an Annual Compliance Report to its regulator, the Postal Regulatory Commission (PRC), which discloses costs, revenues, rates and quality of service associated with its products throughout the fiscal year. InsideSources took note of some key disclosures from the report in January.

Upon receiving the report, the new PRC Chairman, Robert Taub, opened a docket for public comment and issued “Information Requests” seeking clarification on some of the reported data.

Two overarching points can be gleaned from a review of the comments and clarifications: a growing swath of companies and government oversight groups similarly feel discomfort with ongoing problems, and following a long era of lax oversight by the PRC (in favor of taxpayer-funded international travel), the new head of the Commission is making an effort to fix errors and ascertain information that some critics believe should have had better disclosure in the past.

Docket responses focused squarely on the Postal Service’s internal operations and accounting practices, and they came from a diverse group—including think tanks, advocacy groups, and private delivery companies, each of whom called for reforms. A close examination shows several common themes regarding the U.S. Postal Service’s business decisions.

The Annual Compliance Report comes with the backdrop of an already struggling Postal Service. Earlier this month, USPS released a new quarterly financial report revealing less-than-exemplary results—a loss of $754 million for the quarter, which is more than double its net loss for the same period in 2014. Such losses have been an ongoing trend for nearly a decade. In Fiscal Year 2014, USPS reported a $5.5 billion net loss. Among the commonalities in the public comments to the compliance report is the poor overall financial standing of USPS—which, the National Taxpayers Union pointed out, “has sustained a net loss in 22 of the last 24 quarters.”

In recent years, the Postal Service has wiggled its way into the private market with services like grocery delivery, same-day delivery and seven-day package delivery. That extension of services has been largely unsuccessful; new business offerings have come at the detriment of mail delivery, as both Progressive Direct Mail Advertising, as well as Citizens Against Government Waste, pointed out in their comments.

Another common theme includes concerns with cost attribution and accuracy in pricing, as identified by Taxpayers Protection Alliance: “TPA identifies within the report an inability on the part of the Postal Service to properly attribute costs and accurately price its products in response to market factors.” USPS, which has a government-mandated monopoly for some services, is legally barred from subsidizing competitive products with profits from monopoly products. But USPS accounting disguises how such subsidization would be happening. USPS only attributes 55 percent of costs to specific products, while the remaining portion is categorized as institutional overhead.

Chaiman Taub’s “fact-finding mission” for further clarification includes 83 inquiries needed for the PRC’s analysis, including requests for absent data about product cost attribution and non-core service offerings. The Postal Service report has left the Commission with many unanswered questions. Among them: why standard mail cost coverage in 2014 was 10.6 percent lower than projected in 2013, why attributable transportation costs on standard mail have increased nearly 3 times the rate of inflation since 2010, and why the percent of on-time performance for first-class mail and periodicals was below the 2014 performance target.

It’s been well over a month since the Commission issued its request for information, and the Postal Service has yet to answer, despite the January 16 deadline. Postal Service critics argue that the government-mandated monopoly should be self-sustaining and financially viable. To maintain this favored status, they argue it is unacceptable that USPS cannot provide any additional clarity on its own spending habits.