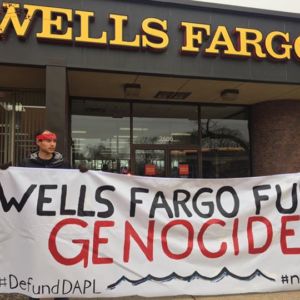 Last year, when winter temperatures on the prairie plummeted, protesters working to stop the Dakota Access Pipeline (DAPL) in North Dakota began to examine other means of resistance. Instead of occupation, their messaging began to center around divestment. A string of high-profile successes followed, with the cities of Seattle and Minneapolis voting to pull their city accounts from Wells Fargo in February and December, respectively. They were joined by thousands of individual account-holders, whose withdrawals, as monitored by a running online tally, total more than $85 million. The campaign continues, with New York state considering divesting its retirement fund. Despite these high profile allies, the end goal of the divestment campaign–namely the cessation of investment in fossil fuel development–seems out of reach, as Wells Fargo and JP Morgan Chase announced that they were renewing lines of credit to oil sands investment.

The news about Wells Fargo and JP Morgan Chase shows the complications of energy infrastructure financing. Over the course of the last year, most of the world’s major banks were targeted with environmental divestment campaigns. In the U.S., Wells Fargo, US Bank, and JP Morgan Chase were particular targets of protests because of both their involvement in city finances and the role they played in the DAPL project.

Best, like many environmentalists, sees the banks’ decision to continue to offer the line of credit as support for the proposed Keystone XL pipeline and a sign that financing is still not listening to the spirit of the age.

“JP Morgan Chase and Wells Fargo had an opportunity to cut ties with TransCanada and the KXL pipeline and they chose to walk on the wrong side of history,” said Ruth Breech, a senior climate and energy campaigner for the Rainforest Action Network.

The situation is more complicated than depicted by many divestment supporters. Thus far, JP Morgan Chase and Wells Fargo have not issued formal press releases on the line of credit. However, when the issue first began to surface this summer, Alan Elias, a senior vice president and head of wholesale and international communications for Wells Fargo, wrote to clarify the bank’s position with respect to TransCanada. Elias wrote that while the bank provides credit to Trans Canada, so far it has not given any loans for the Keystone pipeline.

“There are no project funding measures underway specific to the Keystone XL pipeline,” Elias wrote, explaining that at that point in time, TransCanada had not determined if it would move ahead with the construction or not. “Therefore, Wells Fargo has not invested or loaned any money specific to that project,” he continued.

As of 2016, Wells Fargo had nearly $38 billion in loans and commitments to the oil and gas industry, dwarfing the amount that protesters have managed to divest from private accounts. So far, their efforts have not been successful in getting the bank to transition away from fossil fuels.

The same cannot be said of other divestment targets. In November, US Bank ended its credit relationship with the natural gas pipeline company Enbridge. During the summer of 2016, the bank had been part of a multi-bank $1.3 billion line of credit for the company. The bank’s decision to end its pipeline investment followed an effort over the summer to change the wording of its environmental responsibility policy to specify that the bank does not provide project financing for oil or natural gas pipeline construction.

Among more pragmatic environmentalists, divestment’s mixed track record of effectiveness has made it a questionable proposition. Others concerned about the environmental impact of fossil fuels recognize that pipelines are the safest and most efficient means of transporting fuel that remains essential for economic development for the foreseeable future.

But some divestment supporters still remain, like New York Governor Andrew Cuomo who said on Tuesday that the state’s common retirement fund should divest.

The state’s comptroller, Thomas DiNapoli, the sole trustee of the $201.3 billion pension fund, meanwhile said that there is no firm divestment plan at this point.

Despite the Sierra Club’s claim that the environmental divestment movement is “not going anywhere,” other groups have begun to question the effectiveness of the strategy. Earlier this year, the University of Denver announced that it would not divest from fossil fuels, saying that to do so “would not be an effective means of mitigating global warming.” The school agrees with other divestment critics, who point out that the U.S. and the world at large are not yet ready to proceed to a fossil fuel-free future and that it was naive to pressure for that goal.