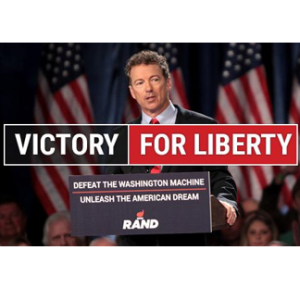 Sen. Rand Paul (R-KY) fundraises off of his efforts to block renewal of Patriot Act provisions

What You Need to Know about the Senate, NSA Reform, and the Expiration of Bulk Telephone Surveillance Authority

A late-night battle in the Senate Sunday over the National Security Agency’s expiring authority to collect Americans’ telephone records ended midnight Monday with a stalemate in the upper chamber over reform, and a sunset of several Patriot Act authorities.

Senate Majority Leader Mitch McConnell convened his colleagues for a rare weekend session for the second time in just over a week Sunday afternoon to try to pass another two-week extension of three expiring provisions of the Patriot Act, including Section 215 — the legal underpinning for the NSA’s bulk telephone metadata collection program.

“We shouldn’t be disarming unilaterally as our enemies grow more sophisticated and aggressive, and we certainly should not be doing so based on a campaign of demagoguery and disinformation launched in the wake of the unlawful actions of Edward Snowden,” McConnell said.

The extension was again blocked by fellow Kentuckian and 2016 presidential hopeful Paul, who fought against Republican opponents accusing him of putting national security at risk for politics and electioneering.

“People here in town think I am making a huge mistake,” Paul said on the Senate floor Sunday. “Some of them, I think, secretly want there to be an attack on the United States so they can blame it on me.”

Despite the roadblock over the short-term extension, Utah Republican Sen. Mike Lee and Vermont Democrat Sen. Patrick Leahy were able to muster the votes necessary to advance their version of the USA Freedom Act, which renews Section 215 while reforming the NSA’s authority to surveil Americans’ landline telephone records, ending bulk collection and moving the storage of records to the phone companies.

The upper chamber voted 77-17 to consider the House bill, which passed last month by a wide 338-88 vote. A final vote for passage could come by Wednesday.

In the meantime, the signals intelligence agency will be unable to collect Americans’ telephone metadata in bulk for the first time in the 14 years since the the Patriot Act was passed in the aftermath of the September 11, 2001 terrorist attacks. After a week of winding down the bulk phone collection program, the NSA officially shut down the program at 7:44 p.m. Sunday.

Activist groups with a history of lobbying the debate since the leak of bulk surveillance programs by NSA whistleblower Edward Snowden in 2013 weighed in Monday about passing the Freedom Act, many of whom described it as only a first step in reform.

“The sunset of Patriot Act Section 215 is a huge victory for those who have been fighting for the past two years to end the NSA’s bulk records program, but surveillance reformers shouldn’t break out the champagne yet: this is a narrow and likely temporary victory affecting only one aspect of the NSA’s spying authority,” policy director for the Open Technology Institute Kevin Bankston said.

“By trying to delay passage of the USA Freedom Act using baseless arguments and fear-mongering, Senate Majority Leader McConnell played a losing game of chicken with those who were dedicated to ending bulk surveillance under the Patriot Act.”

“The USA Freedom Act contains some useful reforms, but it must only be the first step in an ongoing effort to monitor and reasonably limit the tendency to continually expand surveillance powers,” CEO of the Computer and Communications Industry Association Ed Black said in a statement.

“It’s passage will send a clear signal to U.S. citizens and Internet users around the world that the U.S. has listened to surveillance concerns and responded with more transparency and tools that allow improved oversight over the remaining targeted records program.  These measures are crucial for citizens in free societies.”

“The fact that the Senate allowed this law to expire is proof that this type of mass collection of Americans’ records was never necessary in the first place,” R Street Institute general counsel and director of innovation policy Mike Godwin said.

“While not a perfect solution, the USA Freedom Act was a positive first step toward reforming Section 215,” Godwin added. “We’re hopeful that the reforms contained in that bill will be the starting point for discussion as new legislation, including more and stronger reforms, is considered.”

“Ending bulk collection under Section 215 is a victory for privacy, but ending all bulk collection requires the kind of reforms contained in the USA Freedom Act,” president of TechFreedom Berin Szoka said. “And without legislative reforms, the Foreign Intelligence Surveillance Court will continue to operate as a Star Chamber. National security hawks will undoubtedly use Section 215’s expiration as an excuse to push for weaker reforms or a return to the pre-sunset status quo.”

A growing number are calling on Congress to let the authorities remain expired altogether.

“Today’s vote, at least a temporary sunset, and the debate of the last few weeks are a reflection of strong support — across the political spectrum — for meaningful and comprehensive reform of the surveillance laws,” acting director of the American Civil Liberties Union Washington Legislative Office Michael Macleod-Ball said.

“Congress should take advantage of this sunset to pass far reaching surveillance reform, instead of the weak bill currently under consideration.”

During a Monday conference call with reporters, legislative analyst for the Electronic Frontier Foundation Mark Jaycox speculated Monday’s expiration of Section 215 authority will only be a temporary lapse until McConnell holds a round of amendment votes on the USA Freedom Act later this week, with a vote for final passage likely to follow immediately.

Included in those amendments are several proposed by McConnell that “drastically change the bill,” according to Jaycox, including one that deletes the entire text of the current bill for another proposed by the Senate Intelligence Committee, and another that changes the transition period from bulk collection to the new query-based, specific selection term model to 12-18 months.

Other EFF representatives expressed doubt that those amendments would gain any traction in the Senate, and especially not in an eventual conference on the bill with the House, where it passed in its present form with strong bipartisan support.

“A lengthy interim period gives the hawks the chance to really try to put the pressure on members of Congress,” executive director of the EFF Cindy Cohn said. “I feel like that’s less likely given that this is 30 hours.”

“My prediction is based upon the idea that McConnell wasn’t able to muster enough votes to just simply reauthorize Section 215,” Cohn added. “It’s possible they could try to gin something up and scare and shift votes over toward something that could weaken the bill, but I’m hopeful that’s not going to happen.”