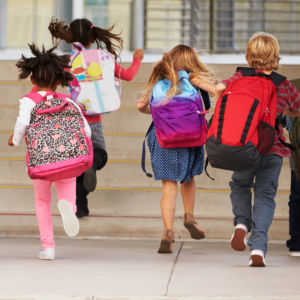 American Education by the Numbers

While college completion rates may be up, test scores in American schools are not, according to a major annual federal report released today that takes a comprehensive look at the United States’ education system. The last ten years have also seen a spike in the public charter school sector and a corresponding decline in private K-12 school attendance, though the vast majority of students still attend traditional public schools.

The government report “The Condition of Education 2017” is released every year by the research arm of the federal Education Department. In addition to early childhood care, K-12, and postsecondary trends, the report also touches on economic opportunity and movement in the labor force among recent graduates.

In 2014, total public school enrollment was at 50.3 million students, and K-12 public schools had revenues of $632 billion from all levels of government to educate those children. On average, only nine percent of that revenue came from the federal government, and the rest was split evenly between state and local sources. According to the report, public schools spent an average of $11,222 per student, or just under 30 percent more than the average developed nation around the world. The U.S. spends far more, about $27,900, on full-time post-secondary students, or nearly 90 percent more than other developed nations.

From 2004 to 2014, the public charter school sector increased from an enrollment of 900,000 to 2.7 million students. Private school enrollment peaked at 6.3 million students in the 2001-2002 academic year, before falling to 5.4 million students in the 2013-2014 academic year. Many of those struggling private K-12 institutions are Catholic schools that have struggled to compete with the growing charter school sector—though some national studies indicate that charter growth could be leveling off. These numbers will be important to watch during Secretary of Education Betsy DeVos’ tenure, as expanding school choice is first and foremost on her policy agenda.

Student-to-teacher ratios have ticked upwards in the wake of the recession after decades of trending down. In 2008 there were 15.3 students per teacher in public schools, but in 2014 that number was back up to 16.1. Despite the uptick, there are still far more educators employed in American schools than there were 30 years ago, in part because of the sharp spike in opportunities for special education teachers. More than a third of American students have a specific learning disability, according to the report.

Despite changes to school discipline policies, the report suggests that American schools are far safer than they were in the early 2000’s. In that time, the share of teens that said they have been violently victimized or had possessions stolen in the previous months at school was halved from six percent to three percent.

In general, test scores in the core subjects of reading and math have stagnated or gotten slightly worse. From 2013 to 2015, reading scores were the same for 4th and 12th graders, but lower for 8th graders, according to the National Assessment of Educational Progress. Scores in math were lower in all grade levels on the same assessment in math, while the share of students who reached proficiency in science was slightly up for the younger grades and unchanged for 12th graders.

The good news is that a renewed focus on graduation rates has had a positive effect. The 83 percent four-year graduation rate is at an all-time high, and more of those students are matriculating directly to college than ever before. Getting a college degree is still correlated to higher earnings, though other studies suggest that the economic outlook for young men is getting worse.

A number of American children still live in poverty—about 20 percent—and many are concentrated in the quarter of public schools that have at least 75 percent of students eligible for free or reduced-price lunches. 1.3 million students in K-12 schools are homeless, a plurality of whom attend urban school districts. A tenth of children under eighteen have one or more parent that did not earn a high school diploma or an equivalent credential. Students who live in poverty or who have a parent without a high school degree tend to struggle academically relative to their peers, according to the study.

2014 was also the first year that the American public school system became majority-minority, with white students making up only 49.5 percent of the system. In 2004, white students accounted for 58 percent of public school students. The percentage of Hispanic students and English Language Learners has grown significantly in that time. Black and Hispanic students are also more than five times as likely to attend high-poverty schools than their white peers.