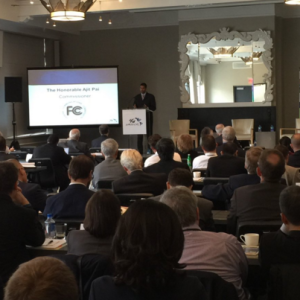 Federal Communications Commissioner Ajit Pai is warning his fellow commissioners to delay next year’s spectrum auction — the biggest the agency has planned yet for freeing up airwaves for hungry wireless providers — or risk “courting disaster.”

“If we can get everything done in time to start the auction as scheduled on March 29, that would be great. But March 29 wasn’t etched onto a tablet, Biblical or electronic,” Pai said at a 4G Americas’ event Thursday.

“If we are not 100 percent confident that the software will perform flawlessly as we make our way to the end of March, we must have the courage to postpone the auction rather than charging ahead and courting disaster.”

The Republican FCC commissioner said it was “critical that we not rush the process” of preparing for the spectrum auction in 2016, when broadcasters will sell spectrum to the FCC to be repackaged and auctioned off to wireless providers, some of whom expect to run out of the spectrum needed to accommodate heavy bandwidth mobile services like video streaming by 2020.

Agency Chairman Tom Wheeler predicts the auction will be “supremely successful,” with estimates for revenue ranging up to $60 billion.

That’s a long shot, according to Pai, especially if the agency doesn’t allow for ample time to test the new software that will repack auctioned spectrum for reuse.

“I realize that the nuts and bolts of IT implementation isn’t a glamorous issue. But it is critically important,” Pai said. “That is why we must double-check and triple-check all of the software. That should include rigorous testing by neutral third-parties.”

“We have seen what happens when the federal government rushes ahead with flawed IT systems,” he continued. “Indeed, Chairman Wheeler himself acknowledged in December 2013 that we want to avoid a software debacle of the kind the country witnessed during Obamacare’s rollout.”

Pai suggested the FCC take up CTIA — The Wireless Association’s request and hold three mock auctions to give participants practice and uncover any bugs prior to March 29.

“When it comes to the incentive auction, we don’t have any margin for error,” he said.

The Republican commissioner previously dissented on auction rules that would place broadcasters and wireless providers in the same spectrum — a recipe for interference issues — and on setting aside 30 MHz of spectrum exclusively for bidding by smaller providers like T-Mobile.

“I’m not sure how much money the auction is going to raise, I don’t know how much spectrum it’s going to clear,” Pai told InsideSources earlier this week. ” What I do know is that some of the steps the FCC has taken have made success more difficult than it otherwise needs to be.”

Pai said the agency is disincentivizing broadcasters by establishing rules that could keep them from getting the maximum amount possible for their spectrum, “picking winners and losers” on the wireless side with the spectrum reserve and restricting how much of certain spectrum other carriers can hold.

“These are not the steps I think you want to take if your goal is to make sure that both TV broadcasters and wireless carriers are going to come to the table,” Pai said. “The FCC only has one chance to get this right.”

On the technical side, making the repacking software public, giving engineers time to work out bugs and removing broadcast TV stations from the duplex gap — the airwaves that separate mobile data uploads and downloads — are all critically important, according to Pai.

“Placing broadcasters and wireless carriers in essentially the same spectrum — that’s going to be a problem,” Pai said. “It’s pretty remarkable that you see broadcasters, wireless companies and licensed advocates on the same side of any issue, but on this, they were united. And they said, ‘Look, your band plan doesn’t work for these reasons — putting broadcasters in the duplex gap or otherwise citing them in the wireless band doesn’t make a lot of sense.”

“Everyone agreed on it, but nonetheless the agency moved forward based on a cherrypicked group of simulations that don’t reflect the technical reality,” he continued. “But that cake has been baked, and so we have to move forward and hope enough icing is placed on top of it to make the auction a success nonetheless.”

In September Sprint announced it would not participate in the incentive auction, while News Corp CEO James Murdoch said Fox likely will. Analysts expect other major players including Verizon, AT&T and even Sinclair Broadcast Group — the nation’s largest TV broadcaster, initially opposed to the auction — to participate as well.

“Honestly, I just don’t know,” Pai answered on whether he thought the auction would be a success or failure. “What I do know is that the chances of success have been diminished by some of the policy cuts that have been made over the last several months.”

One of the lessons learned during the last auction, the commissioner explained, is they’re hard to predict. The FCC expected to pull in between $18 and $20 billion ahead of January’s AWS-3 auction, and in reality made $40 billion.