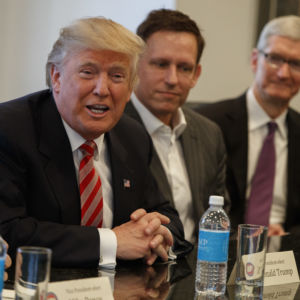 More than half of “technology elites” are optimistic about the industry’s future in the next administration, according to a new poll released this week. It comes against the backdrop of CES 2017 and weeks ahead of Donald Trump’s inauguration.

Burson-Marsteller on Thursday released its Age of Trump Technology Policy Survey, which found 59 percent of those at the top of the industry “believe the incoming Trump administration will be favorable to the technology industry.” Seventy-six percent say the “industry’s best days are still to come.”

That’s compared to 59 percent of 1,000 members of the general public who believe the industry’s best days are ahead. Fifty percent believe Trump will look favorably on the industry.

Burson-Marsteller polled 500 individuals in mid-December who either work or invest in the tech sector for its industry sample.

“This new survey reveals intriguing insights into the beliefs of those closest to the technology industry compared to the general public, and are especially relevant now right before the inauguration and during CES, the most important technology gathering of the year,” Burson-Marsteller CEO Don Baer said. “Interestingly, the findings suggest those in the technology industry are very optimistic about the industry’s direction and prospects for the next four years, even though they are less sure of the impact of the incoming Trump administration on it.”

Both groups agree the industry will grow in the next four years, but only 50 percent of the general public believe Trump is a technology industry supporter, with the percentage among tech only 9 percent higher. Tech representatives split evenly on whether the Obama or Trump administrations understand the issues facing the industry better, while 58 percent of the public said Trump.

Despite the industry’s positive outlook under Trump, the study found tech elite opinions about the economy veer sharply from the president-elect’s. Eighty percent say tech is the most important industry to the U.S.’s economic future and 74 percent say “if innovation does not occur in America it will continue overseas.”

Trump’s views tend to align more with the general public, 37 percent of whom say technology is a job destroyer, and 35 percent that innovation negatively affects average American jobs. Seventy-four percent “agree that traditional manufacturing and service jobs are more important for the economy than expanding innovation,” compared to 68 percent of tech elites who agree.

The general public’s responses echo promises made by Trump on the campaign trail to overhaul trade policy and bring jobs back to the U.S., especially in manufacturing throughout the Rust Belt.

Trump also took time to blast some of the biggest companies in Silicon Valley. He hit Apple for failing to cooperate with an FBI warrant, accused Amazon of tax dodging and potential antitrust violations, appointed an FCC transition team opposed to net neutrality, and rejected the push by firms, including Facebook and Google, for more highly skilled H-1B work visas. The industry responded in kind by donating overwhelmingly to Democratic nominee Hillary Clinton.

The president-elect pushed reset on the relationship in December by inviting tech leaders to Trump Tower, where he pledged to help them succeed in areas like trade and market growth. He has also offered some favorable comments about the H-1B program.