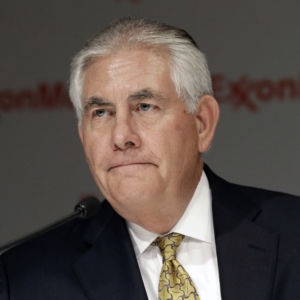 Rex Tillerson, chief executive of ExxonMobil, has officially become President-elect Donald Trump’s nominee for secretary of state. Trump made the announcement this morning.

I have chosen one of the truly great business leaders of the world, Rex Tillerson, Chairman and CEO of ExxonMobil, to be Secretary of State.

But even before anything was official, climate advocacy groups wasted no time in denouncing the nominee, though many energy experts believe Tillerson would push Trump to take action on climate change.

“There is a real concern about Trump creating a government by and for the oil and gas industry,” said Kathy Mulvey, climate accountability campaign manager for the Union of Concerned Scientists (UCS), in a Monday conference call.

She was joined by Annie Leonard, executive director of Greenpeace USA and Bill McKibben, cofounder of 350.org, an international environmental organization.

“I would not trust him to walk my dog, but Trump is giving him this important position,” Leonard said. “It is a powerful job, but it is not powerful enough to stop the movement away from fossil fuel.”

The strong rhetoric isn’t surprising. But the organizations’ criticism of Tillerson may be just a veil for a broader goal: destroy ExxonMobil.

UCS likes to pride itself on its “independent science to work to solve our planet’s most pressing problems.” But it more strongly resembles a political activist group like 350.org than an objective scientific society, such as the American Chemical Society or the American Medical Association.

Despite the claims of “independent science,” UCS reports don’t produce unbiased findings, peer-reviewed by other scientists. Instead, research is used to push a specific agenda.

One of the group’s latest reports was a “climate accountability scorecard,” measuring companies’ climate-related positions. ExxonMobil mostly received “egregious” grades, the lowest possible score. However, the report was subjective, offering little to no actual scientific methods to determine the rankings.

In order to undermine ExxonMobil, advocacy groups have been pushing state attorneys general to launch an investigation into the energy company for allegedly discovering the risks of climate change decades ago and then hiding it from the public by funding research to deny climate change.

New York Attorney General Eric Schneiderman launched a probe into ExxonMobil, but after nearly a year investigating the company, he was forced to abandon his legal premise that ExxonMobil engaged in a conspiracy to mislead the public. Schneiderman has launched a new investigation into the company for misrepresenting the cost of climate change policies to the company’s bottom line. Those claims have largely been debunked.

Earlier this year, reports emerged that the climate organizations attacking Tillerson have been plotting behind closed doors to destroy ExxonMobil. In April, media outlets, including the Washington Free Beacon and Wall Street Journal reported that top climate activists, political operatives, and trial lawyers met at the Rockefeller Family Fund in New York in order to plan a far-reaching campaign to essentially dismantle the company.

A copy of the meeting agenda showed that among the ferocity of group’s objectives, which the company has termed a conspiracy, include “creating scandal” through actions by state attorneys general to obtain internal documents from ExxonMobil.  The memo specifically stated its goals to “delegitimize [ExxonMobil] as a political actor,” “force officials to disassociate themselves from Exxon,” and “drive divestment from Exxon.”

The New York Times has reported that ExxonMobil has been forthcoming about its research over the past few decades, which has lined up with mainstream climatology at the time. The company made disclosures to investors about the risks of climate change, and it has a section on its website discussing the need to reduce greenhouse gases. Tillerson supports passage of a carbon tax to decrease fossil fuel consumption.

The climate activists opposing Tillerson made clear they do not believe that is good enough.

Asked about Tillerson’s support for a carbon tax, McKibben stated: “There is literally no chance that he will follow through on that.”

“The deeds aren’t adding up to the action,” Leonard added. “ExxonMobil has faced a lot of pressure on climate issues and some of those words are moving in the direction of accepting the Paris Agreement and carbon pricing, yet the company hasn’t actually backed that up.”

But many experts have noted Tillerson would be a progressive voice on climate change who would have the ear of a more skeptical Trump. Paul Bledsoe, a former climate change adviser in the Clinton administration, told the New York Times that Tillerson “might bring Trump equal measures of new pressure and political cover to engage on international climate change issues.”

As secretary of state, Tillerson would have direct involvement in supporting the international climate accord agreed upon in Paris last year. He has worked with foreign leaders in more than 50 countries while leading ExxonMobil, and his diplomatic ties could be successful at keeping countries true to their word in reducing emissions.

Tillerson will face close scrutiny on Capitol Hill if nominated. Some Senate Republicans have already expressed hesitancy over approval because of Tillerson’s business dealings in Russia. But the environmental activists seem more determined to use nomination hearings as a way to drive their agenda against ExxonMobil.

350.org’s McKibben stated on the conference call that he sees the nomination hearings as an opportunity to have a “serious on the record questioning about [the attorneys general investigations].”

“These investigations are important, and they must continue regardless of what happens with the secretary of state nomination,” added Leonard.

UPDATE: This post has been updated after publication to reflect Donald Trump’s recent announcement of Rex Tillerson for the secretary of state position.