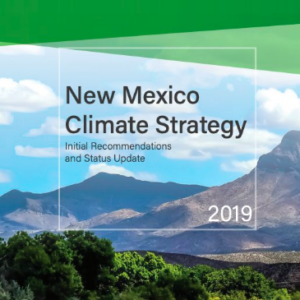 Does New Mexico’s climate change strategy try to do too much, too fast?

A governor-appointed climate change task force released its initial report last week, describing initiatives taken since her sweeping January executive order aimed at reducing greenhouse gas emissions by at least 45 percent of 2005 levels as of 2030 and outlines the long road ahead to reach the state’s goals.

State business leaders — and supporters of the state’s oil and gas industry and energy workers — counter that the proposals described in the report go too far, with one conservative nonprofit executive calling it “a love letter to radical environmentalists.”

Gov. Michelle Lujan Grisham, in a message included in the report, wrote that the state has an opportunity to serve as an example of balanced leadership as it walks the line between imposing tougher regulations on the oil and gas industry, tackling vehicle pollution and addressing other activities linked to high volatile emissions.

“We will make our communities more sustainable and resilient. We will make sure the benefits of clean, renewable energy touch every New Mexican,” the governor wrote in her introduction to the 28-page report. “We will protect the sanctity of our soil, our water, and the air we all breathe. We will not leave anyone behind.

“We will employ every strategy — and break new ground where we can — in reducing emissions and building our economy,” the governor said. “We will lay the foundation to provide for the generations of New Mexicans yet to come.”

The governor ordered the formation of the New Mexico Interagency Climate Change Task Force soon after she took office in January. She also directed New Mexico to join a coalition of other states formed in 2017 after President Trump announced the U.S. withdrawal from the Paris Agreement.

The “highest priority” for New Mexico’s change in energy policy is the reduction of methane emissions from oil and gas through statewide regulations, according to the report.

However, the New Mexico Oil & Gas Association says gas companies have been working to reduce methane emissions through improved technology and maintenance and numbers are down while production — especially in the Permian Basin — continues to break records. The Permian Basin, which runs through southeastern New Mexico, is one of the largest energy-producing regions in the world.

Larry Behrens, western states director for Power the Future — a nonprofit that describes its mission as the support of energy workers — said the Lujan Grisham administration’s efforts will cost jobs.

“This report is so out-of-touch with economic reality that it appears the word ‘jobs’ is only mentioned once, while the governor’s name is mentioned six times,” Behrens told InsideSources. “Tens of thousands of New Mexicans work in the energy industry but you don’t hear from them in this report. It’s those workers, and not more government bureaucrats, that deserve to be heard.

“This is a love letter to radical environmentalists disguised as a government report,” Behrens said. “The ideas presented will kill energy jobs in our state while green corporations will reap the profits.”

In contrast, Jon Goldstein, director of regulatory and legislative affairs for the Environmental Defense Fund, applauded the Lujan Grisham administration for work done so far and for its roadmap for the future. Goldstein is a former secretary of New Mexico’s Energy, Minerals and Natural Resources Department and the former deputy secretary of the state’s environment agency.

“New Mexico should be proud of what Gov. Lujan Grisham and her administration have set in motion to address climate change after just 11 short months on the job,” Goldstein said. “The report powerfully underscores that to achieve the reductions promised, New Mexico must deploy a multi-sector policy that puts an overall limit on statewide pollution that declines over time, while utilizing a flexible, market-based approach to meet that limit to ensure access to the lowest-cost pollution reductions.

Goldstein said that actions taken in the next years are “critical.”

“Getting enforceable, nationally leading methane pollution-reducing regulations on the books will help protect the lungs and the livelihood of New Mexicans who deserve clean air and a safe environment,” he said. “Moreover, beginning the regulatory process to design and implement a cost-effective, market-based program will be essential to meeting our climate targets.”

In its report, the task force did advise that state agencies “pick up the pace of our work” to reach the emission targets set by the Energy Transition Act, the groundbreaking renewable energy bill passed during this year’s legislative session — often referred to as the “little Green New Deal.”

The governor in September also announced that New Mexico will be proposing and implementing clean car standards that are more stringent that current federal rules. Lujan Grisham’s proposal would apply to vehicles manufactured starting in model year 2022 sold in the state and would increase the average fuel economy to 52 mpg — as opposed to 37 mpg under the proposed federal rollbacks.

The task force will release another progress report in September 2020.