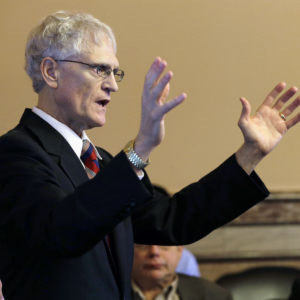 Back in December 2017, the REC estimated that the fiscal year 2018 revenue would amount to approximately $7.237 billion, which led to a then budget shortfall of between $45 million to $90 million. Following the passage of the Federal Tax Cuts and Jobs Act in late December, both the Department of Management and Republicans involved in the budgeting process in both the House and Senate anticipated a tax revenue windfall due to Iowa’s federal deductibility resulting in Iowans paying more state income taxes, decreasing that estimated shortfall of approximately $37.2 million for fiscal year 2018. At this month’s meeting, both the LSA and the Governor’s Office anticipated the revenues for the remainder of fiscal year 2018 would be more than in December, bringing in approximately $7.280 million and $7.257 million, respectively. Roederer, speaking on behalf of the Governor’s Office, expressed that the reason their estimate was lower than the LSA’s was due to the fact that many Iowan’s prepaid property and quarterly taxes before the beginning of 2018, in order to be able to deduct them from their 2017 taxes before the Federal Tax Cuts and Jobs Act no longer allowed the deductions. Still, Roederer anticipated that not all Iowan’s took action before the deadline, which is what is creating the new estimate. The board agreed to modify the two estimations at the new number of approximately $7.270 billion.

Roederer told reporters that with the estimated revenue increase of approximately $33 million, that Governor Kim Reynolds would not release a modified proposal for mid-year budget cuts, which currently sits at approximately $27 million (Reynolds is relying on the windfall from the Federal Tax Cuts and Jobs Act of approximately $28.4 million, according to the REC, to maintain a positive balance in the budget for fiscal year 2018). As for whether or not the legislature, which has yet to pass a unanimous mid-year deappropriations bill, will make any changes to their respective bills, House Chair of the Appropriations Committee Pat Grassley (R-District 50) released a statement saying: “After today’s REC meeting, we have a much clearer picture of what adjustments are truly necessary for the FY18 budget.”

Continuing on for the fiscal year 2019, the REC settled on an estimate of approximately $7.733 billion, up approximately $206.8 million from last December’s estimate of approximately $7.527 billion. The large increase in revenue is mostly a result of federal tax reform, rather than economic growth in the state, Roederer said. According to the most up-to-date REC estimates, the state anticipates approximately $152 million in windfall from federal tax reform, as well as an additional $36.3 million from the Federal Budget Act of 2018. According to Iowa code, the legislature can only use the December estimate when budgeting for fiscal year 2019. The approximately $206.8 million in new estimates is what Reynolds foresees as a windfall it can pass down to taxpayers, with her tax cut proposal that would cut income tax rates by approximately $1.7 billion over six years. While the House remains in the process of working off of Reynolds’ proposal, the Senate has already passed its own tax reform bill that cuts overall taxes by approximately $1 billion in the first year (2019).

Among the outlying concerns when it comes to budgeting for the next three years, the REC listed three factors that could drastically impact the revenue estimates. Primarily, members warned that the tariffs placed on foreign steel and aluminum could result in trade wars that would impact American farm exports. According to Lyons, approximately 47 percent of Iowa’s corn is exported. Roederer said that out of the 186 countries that the nation trades with, 50 percent goes to Canada and Mexico, which could derail NAFTA talks and ongoing negotiations, which was another issue that could impact revenues. Lastly, the board was concerned about any possible changes to the Renewable Fuel Standards that have been debated in D.C. over the last month, as corn farmers rely on ethanol plants to sell corn to. Any change to the incentives to use renewable fuels would impact farm income and, further, tax dollars.